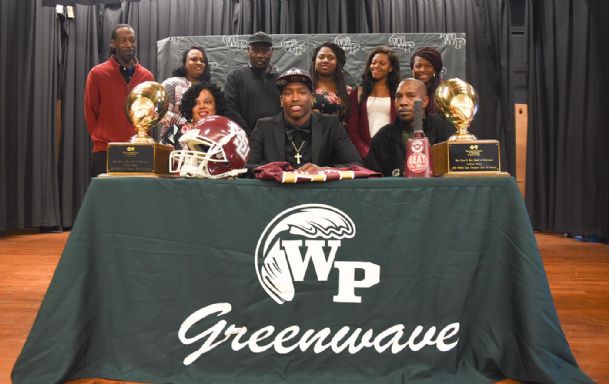 Final examinations at West Point followed. After all, Murphy is completing his course work early and graduating this month.

One final piece of high school business was resolved Tuesday when Murphy and his family gathered for a signing day ceremony at the school auditorium. Murphy honored a year-long commitment to Mississippi State University by signing to play with the Bulldogs.

The paperwork will be officially faxed to MSU today on the opening day of a three-day signing period for high school seniors and junior college transfers. It is the first time for dual signing days. National Signing Day will still follow on Feb. 7 this school year.

"(MSU) has always been home," Murphy said. "To be able to play 15 miles from home in front of my friends and family each week, it's a blessing. Very proud of this opportunity and humbled by it. Everyone wants to play on the next level. You feel fortunate when you are given this chance."

Murphy helped lead West Point to a pair of state championships. In his final two varsity seasons, West Point won 29 of 30 games. The Green Wave had last won a title in 2010.

"It felt great to get back to the top," Murphy said. "Nobody outworked us the last couple of years. For the seniors, we are proud of this legacy. It was hard, even though, sometimes, we made it look easy."

Murphy moved back to quarterback this season after playing there as a sophomore. In his final high school season, Murphy ran 1,856 yards and 31 touchdowns, while throwing 1,058 yards and nine more scores. He played defense sparingly as a junior but was not needed there this season.

"Marcus can play all 22 positions on the field," West Point coach Chris Chambless said. "He can accomplish anything he wants on a football field. Great leader, hard worker. The other guys look up to him and count on him, while he wants the other guys to get all the praise and the accolades."

Former MSU coach Dan Mullen offered Murphy early. His staff was planning on playing Murphy on defense, where he was projected as a safety. New MSU coach Joe Moorhead has seen enough of Murphy on tape and in person state championship weekend, to feel comfortable about turning him loose on the offensive side of the ball.

While the coaching change led to some speculation that he might stray from his commitment, the 6-foot-1, 197-pound Murphy said that could not be further from the truth.

"People are really going to be surprised (by Moorhead)," Murphy said. "He has a high character. He has a great offensive mind. He is going to turn out to be a really great coach and I can't wait to play for him. There wasn't going to be a change. I was locked in from the beginning."

The 247 web site lists Murphy as a 4-star prospect, as well as the fourth-best prospect in the State of Mississippi. It also lists 13 Division I offers, including MSU.

Murphy will enroll next month and start classes on Jan. 8.

At MSU, Murphy has a chance to pair up with former Golden Triangle Area standout Kylin Hill of Columbus, who is finishing his freshman year with the Bulldogs. Also in the backfield is former West Point standout Aeris Williams, who is MSU's leading rusher as a junior this season.

"Both (Hill and Williams) encouraged me to come," Murphy said. "We are going to do some special things there."