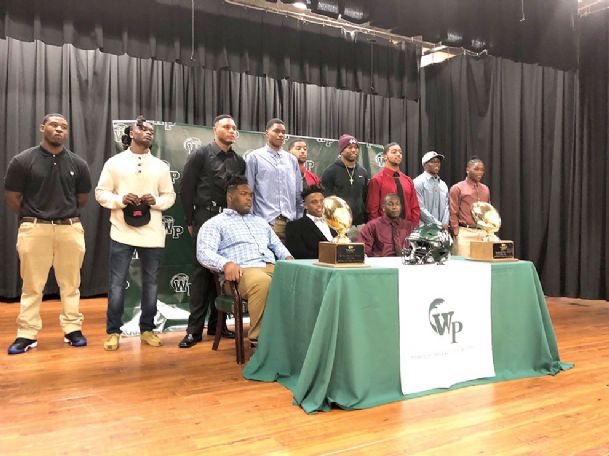 Murphy wanted to give his former football teammates at West Point High School the proper sendoff on National Signing Day.

On Wednesday, 11 more West Point High seniors signed National Letters of Intent to play this fall in the Mississippi Association of Community and Junior Colleges.

"These were my brothers," Murphy said. "It only seems right we would have one more event together."

Chris Chambless has guided West Point to three state championships this decade. The veteran coach admits he still hasn't seen anything quite like Wednesday.

"To have 12 players sign is special," Chambless said. "I don't know if we will see something like this again. It is a testament to this senior class and their hard work. They did a great job of upholding the tradition of our program, playing with pride and dignity. It was a pleasure to coach each of them.

"A day like today is special because all of the hard work pays off. They have a chance to continue to do what they love, while getting an education."

Murpby ran for 1,856 yards and threw for 1,058 yards his senior season. Wide receiver/defensive back Jason Brownlee was on the receiving end of 11 of team's 17 passing touchdowns.

"This is a milestone day," Jason Brownlee said. "To be able to join a program the caliber of East Mississippi Community College is exciting. It will be great to be able to carry on another winning tradition and to be part of what is next for them."

Sharing the backfield with Murphy this season was Chris Calvert, who ran for 1,445 yards and 25 touchdowns. Calvert signed with the only team to defeat EMCC this past season, Northwest Mississippi C.C.

"Very excited about the chance to play at Northwest," Calvert said. "They have one of the top programs in the state. I am looking forward to the chance to learn what playing on the next level is all about. It's a tough league, but all of these guys here are ready for that challenge."

The Prices will serve in the military this year and start at Holmes C.C. for the 2019 season.

West Point has won 29 of its last 30 games. The lowest margin of victory this season was 19 points.

"It was as special group," Chambless said. "Winning one championship is special. Repeating is an even more incredible job. The seniors took this season seriously. They wanted to leave their mark. They wanted to distinguish themselves in the history books by going back to back."