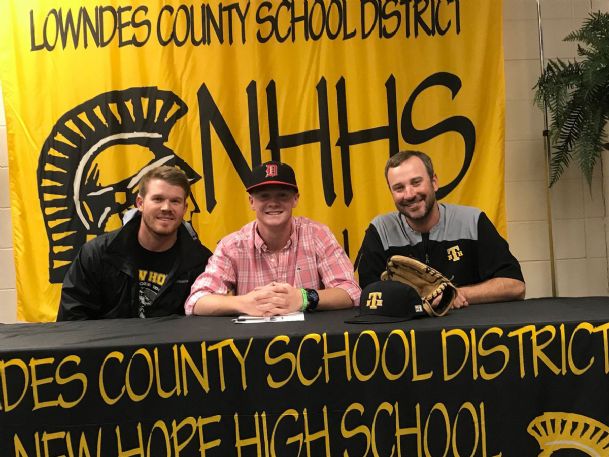 However, they kept popping in his head.

"When you are hurt, you can't help but wonder if you are going to ever get back," Pounders said. "Everybody wants to play college ball. However, you have those doubts (and) they haunt you a little bit."

Pounders tore an anterior cruciate ligament during a soccer match in November of his junior year. Eventually, he recovered from the injury and worked his way back to the baseball team for a late-season run to the Mississippi High School Activities Association (MHSAA) Class 5A North State championship series.

This season, Pounders has been a catalyst for New Hope in its run to the MHSAA Class 4A, Region 4 regular-season championship.

"Drew is the kind of player you can stick anywhere and he is going to make you better," New Hope coach Lee Boyd said. "He gives this team so many things we need."

Even the college thing has worked out, too, as Pounders signed a scholarship offer with Mississippi Delta Community College last month.

"When (MDCC) coach (Jarrod) Parks called, it meant the world to me," Pounders said. "There was a relief and an excitement. I took a visit there and knew this was going to be the right thing for me to do. Playing college baseball is always been the goal, and now it is exciting to know that it is going to happen."

"We definitely have a pipeline going," Boyd said. "It doesn't matter the sport, if a player goes somewhere and has a positive experience, it's going to lead to more opportunities for other players from the program. As a coach, it is exciting when players reach the next level. You want to see them be successful. You want to see them continue their education and get a chance to continue to play."

While Pounders said familiarity with the program wasn't an overriding factor, it helps when former teammates offer encouragement.

"New Hope baseball is one big family," Pounders said. "That is one of the reasons why we have had success because of the togetherness, how well we play together as a team. I saw a lot of that with Delta, too. You know (former high school teammates) aren't going to steer you in the wrong direction. If they are telling you this will be a good thing for you, that's encouraging."

Boyd is proud of Pounders' growth offensively. He has been batting third or fourth in the lineup and is third on the team with a .400 average.

"He has spent a lot of time on his offensive game," Boyd said. "The extra work in the cage has paid off. He is a little stronger this year and you can tell that he approached this season with something to prove."

In its first season in Class 4A after the latest round of reclassification, New Hope has its sights set on another state championship run. Its 6-4 victory against Kosciusko on Tuesday night wrapped up the Region 4 championship with a 7-0 mark.

"We have been really good offensively all year long," Pounders said. "You really want a lot of players hitting with confidence going into the playoffs, and that is where we are. As a senior, it's been an honor to be one of the leaders this season. The togetherness on this team. It's really a close group. When we face adversity, we are there for each other. We have the makeup of a team that can go a long way."

4. Recruiting could be a 'sad situation' for many if high school football is canceled this fall HIGH SCHOOL SPORTS