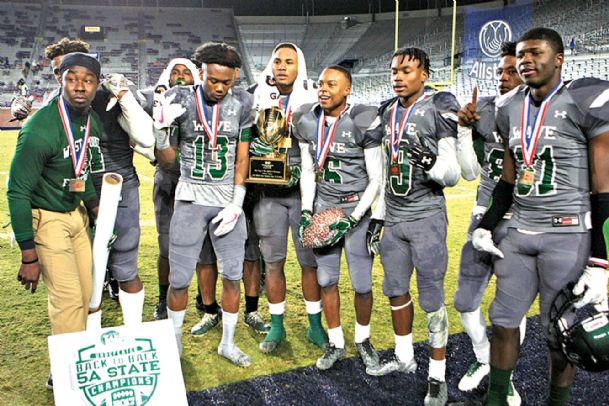 We have reached the midway point of our annual countdown to the start of the prep football season.

The first couple of weeks of practice are spent making sure everybody is in shape. Hot weather conditions are monitored and conditioning is at the forefront. As we shift into August, the first hints of a game plan are installed.

While we wait for those "Back to School" sales to hit in full force, we consider some more questions about the upcoming season.

Which is this season's biggest game?

We hope it will be better than last season's installment, however, the West Point at Starkville matchup Aug. 31 appears to be the must-see game of the season.

A year ago, West Point cruised to a 28-3 victory at home. Heavy rains prior to kickoff made the track extremely wet at Hamblin Stadium.

West Point likes to run the football, while Starkville likes to throw the football. Thus, rain always will favor the running team.

However, the storyline centered around West Point's miraculous effort on the defensive end. The Yellow Jackets were stymied. A team with usual balance couldn't move the football on the ground or through the air.

This season, Starkville is the favorite. The Yellow Jackets return almost everybody from last season, while the Green Wave have holes to fill on offense.

However, don't sale this game short. It has delivered drama in the past and may be in position to do just that again.

Which is this season's most under-valued player?

Starkville High senior running back Rodrigues Clark gets the nod.

As the season progresses, Clark has a chance to emerge as the best running back in MHSAA Class 6A. A year ago, Clark ran for 1,705 yards and 17 touchdowns. That was enough to move him up higher on several recruiting boards.

During the offseason, Clark committed to Memphis. However, Starkville will play a top-notch schedule and there is a chance some Southeastern Conference honors will roll in before National Signing Day arrives.

Luke Altmyer blossomed at quarterback late in his freshman campaign. It will be interesting to watch the synergy between these two in the backfield.

With this being his senior season, Clark knows how much the extra work can pay off. Look for him to be rank among the state's best.

What will be the key for Columbus to return to the playoffs after a one-year absence?

If any area team is a wild card, it may be Eric Rice's first Columbus squad.

A year ago, the Falcons began the season with a smaller than usual roster. Injuries at key positions then hampered the team's ability to score points. Quarterback play was up and down. However, that was in large part due to sluggish play by the offensive line. Even when Kylin Hill led the Falcons to the playoffs in 2015 and 2016, the squad still had some issues along the line.

This season, several faces will return on the offensive line. The biggest concern is whether these players have gotten bigger, stronger, and faster during the offseason.

Columbus will again be young and unproven at quarterback. Beginning the year with West Point, Noxubee County, and Starkville also could complicate things.

However, line play will be where it is at with this team. The defense has playmakers. The offense does, too. It will be up to the line for those playmakers to shine.

If any program had a tumultuous January through May, it would be Caledonia.

The Confederates went through three potential head coaches about 12 weeks coming off the heels of a winless season in 2017.

As is usually the case when a team has a winless season, morale slips a little bit. The numbers on the team also drop. Some players lose the passion for the game when the scoreboard is lopsided on a weekly basis.

Kelly took the job after spring ball, so this will be learning on the fly.

Each season Caledonia plays one of the softer non-region schedules. The Confederates have a chance to take that schedule and build a strong start. The MHSAA has the school in Region 2, so there is no Louisville or Noxubee County standing in the way of competing for a region title.

A year ago, Caledonia lacked star power on offense. The defense had some quality players. As the season wore on, more sophomores earned playing time, which should bode well for this year's squad.

The challenge for Caledonia is to forget about last season as soon as possible. It is a program that has fought for stability. Perhaps Kelly and his staff can help change that in the year ahead.

Any special requests for the bands this season?

No football season is complete without a heavy dose of "The Horse" by Cliff Nobles.

After that, one can never go wrong with cartoon themes. Give me "The Jetsons" or "Pink Panther" during any change of possession and you are on to something good.

We are blessed with several quality bands in the Golden Triangle. They also put in long hours in anticipation of the upcoming season.