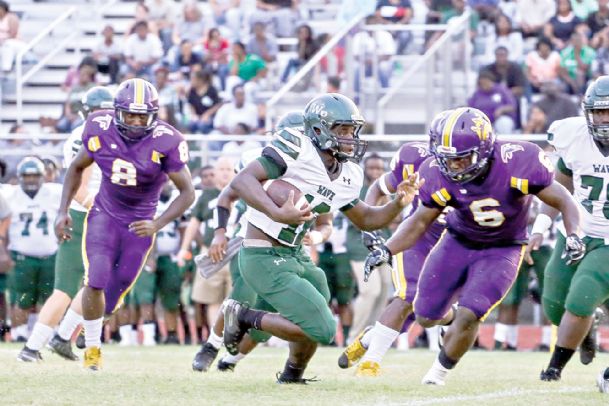 West Point High School junior running back Dantariyus Cannon runs up the middle of the Columbus defense on Thursday night in Columbus. Cannon had six carries for 118 yards in a 55-6 victory. Photo by: Chris McDill/Special to The Dispatch

West Point High School running back Jimothy Mays breaks free for a long run in the third quarter.
Photo by: Chris McDill/Special to The Dispatch

In his first game with several new players on offense, almost all calls made were correct, as West Point rolled past Columbus 55-6 in the Mississippi High School Activities Association (MHSAA) season opener for both teams at Falcon Field.

"Anybody on this team can have the big night," West Point junior running back Dantariyus Cannon said. "I think that is what going to make this offense fun to watch. There is going to be a lot of mystery. Other teams won't know what to expect."

The running back tandem of Marcus Murphy and Chris Calvert carried the program the previous three seasons. Now, the Green Wave have a new running back rotation with plenty of options.

"The one thing I know is we are fast," Chambless said. "We still haven't figured out what we are doing, or how we are going to go about doing it. The offensive line has experience. All of the backs are quick. This has a chance to work out."

Chambless may have been underestimated the abilities of an offense that led the Green Wave to their 29th-straight victory. West Point had 522 total yards on 51 plays -- a better than 10-yard-per-play average.

The Green Wave scored on all five first-half possessions and led 35-0 at halftime. Ten players ran the ball, while seven caught passes and three threw passes.

Senior Jake Chambless is the squad's quarterback. Junior Gray Berry is the reserve. Still, neither was behind center on the first offensive play of the season. Instead, senior Brandon Harris took the initial snap out of the Wildcat formation.

"The coaches have been playing around with us a little bit in the film room," Harris said. "I wouldn't put anything past our coaches. They will try anything. Last year, the offensive game plan was (Murphy and Calvert). This year, well, it could be anything."

Cannon ran six times for 118 yards. Senior Kameron Martin ran for 74 yards and scored three touchdowns. As recently as last week, Chambless said Martin also would get some plays at quarterback. That was just about the only thing that wasn't tried.

"Humble and blessed to play this game with these guys," Martin said. "Tonight, I scored three times. Next week, it is going to be somebody else. That's what this team is all about."

Cannon said several of the offensive players watched Murphy and Calvert closely. He said their one-two punch as offensive leaders trickled down.

"As young guys, you want to look up to somebody, they made it easy," Cannon said. "This is how you should do it on this level. They showed you how to work hard, how to win championships, so now we are eager to get our chance to do the same thing."

Harris said last year's team had a business-like approach. He said this year practices have been "far more intense" because so many players are trying to work into the rotation.

"The competition has been great. It really has helped us," Harris said. "You want your carries or receptions. Guys are competing every day in practice. That is the West Point standard. The tradition starts on the practice field. This team is great at practice."

West Point committed four penalties and forced the game's only two turnovers. Latarius Embry had a 63-yard interception return for a touchdown.

"For a first game, this was pretty incredible," Chambless said. "We will go to the film and find the things we need to critique. You can't get too down about anything you saw here, though. This team will get better because they have a great attitude."

That great attitude should lead to another set of intense practices.

"The win streak, the last two state championships, we are going to have fun with all that," Harris said. "This team really likes one another. We are going to push each other all year. It's just fun because we got so many guys who can play."