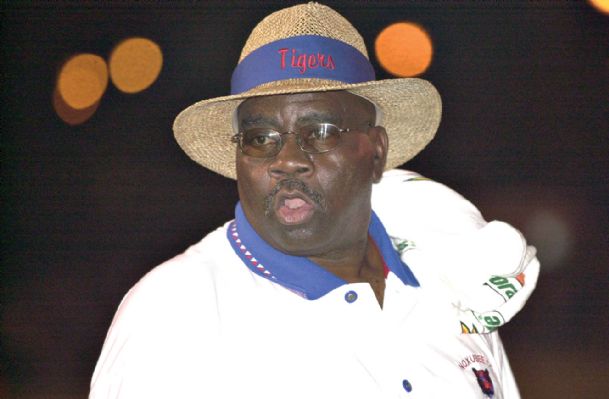 Longtime Dispatch photographers Joe Ray Roberson and David Allen Williams captured pictures of coach M.C. Miller when his Noxubee County High School football teams played against West Point on Aug. 27, 2004, and against Columbus on Sept. 15, 2001. Miller, who is now the head football coach at Louisville High, is in his last season. His team will play West Point at 7 p.m. Friday. Photo by: Dispatch File Photo

Frazier was entering the ninth grade. The Wildcats were planning to use him on the varsity level. It was the beginning of a beautiful working relationship.

"We talked about confidence," Frazier said. "He challenged me to become the best football player I could become. When you are young like that and trying to fit in, it means a lot when your coach believes in you like that. It made an impact."

Miller has been making an impact on high school football players for the past 39 seasons. The longtime coach at Noxubee County and Louisville high school announced during the summer this would be his final season. Offensive coordinator Randal Montgomery will take control of the program when the season ends.

Louisville hopes that ending happens in Hattiesburg at the Mississippi High School Activities Association (MHSAA) Class 4A State championship game. Louisville (1-0) will take the next step in that direction at 7 p.m. Friday night when it plays at West Point (1-0).

"Every day is a blessing," said Montgomery, who was the head coach the last four seasons at Columbus High. "He has forgotten more football than most of us know. To be able to be around him every day and to learn each and every day, it's incredible. As a coach you never quit learning. You always need to get better. This year is going to be special."

Frazier grew up watching some of Miller's best teams at Louisville. In 2013, the Wildcats went 16-0 and won the Class 3A State championship.

The Wildcats had struggled for coaching stability before Brad Peterson took the program from 2-7 in 2004 to back-to-back state titles in 2007 and 2008.

Miller has helped keep Louisville in the upper echelon of Class 3A or Class 4A.

At the same time, he has formed quite the rivalry with Noxubee County and current coach Tyrone Shorter. Miller and Shorter coached together at Noxubee County High and led the Tigers to the Class 4A title, the program's first, in 2008.

Miller began his head coaching stint at Noxubee County High in 1995. Shorter then replaced Miller prior to the 2010 season.

They have coached several regular-season and playoff games against each other. Some years remaining in state championship contention hung in the balance.

"It's always been special because he means a lot to me," Shorter said. "This year will be different since it's the last one. You know what you are getting. You are getting a hard-nosed opponent and you know you are going to have to limit mistakes and execute well."

Miller said the wins and losses aren't as important as the lives he has touched.

"Football is special," Miller said. "The game teaches you so many life lessons. How do you handle adversity? How do you work together as a group to reach a common goal? The memories you make on a football field on a Friday night can carry you a lifetime."

Frazier recalls those memories. At Louisville, he played quarterback, ran and caught the ball, and played tenacious defense. His senior season included All-State honors after 56 receptions for 842 yards and 11 touchdowns.

"The thing about coach Miller and really all the coaches," Frazier said, "they are going to put you in a position to succeed. When you take the field to play the game, you are going to have the best chance to win possible. We had fun during the week. On game nights, we were prepared, serious, determined. I think that is a testament to the coaches. They put in a lot of hard work to help us succeed."