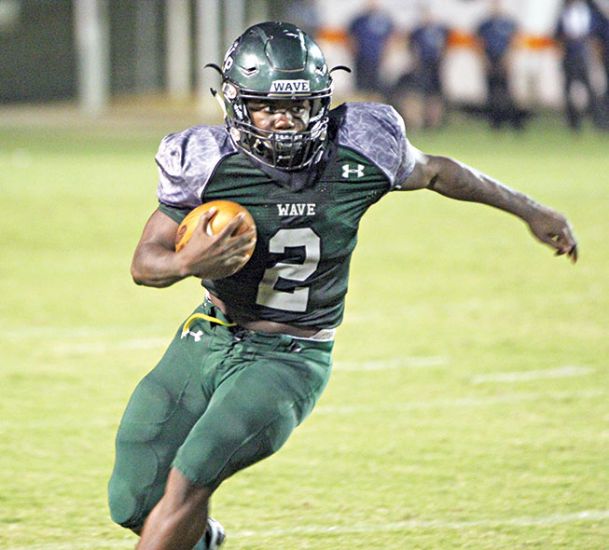 West Point High School junior athlete Brandon Harris turns upfield for a big gain in the third quarter of a 26-10 victory against Louisville on Friday night. Photo by: Rocky Higginbotham/Special to The Dispatch

WEST POINT -- The West Point High School football team knew its linebackers would be an asset before the 2018 season.

Undoubtedly, the senior duo of Brentt Cunningham and Brandon Lairy were the team's tone-setters Friday night in a 26-10 victory against Louisville at Hamblin Stadium.

"We expect these performances from (Cunningham and Lairy)," West Point coach Chris Chambless said. "They can be the worst critics on themselves. We keep them positive and playing at a high level. We needed that boost from them tonight.

"We want to play the toughest opponents during the non-region slate. We were not very good in a lot of phases of the game, but it isn't something we cannot fix on the practice field. I'm glad we had good leadership on the field."

Even though mistakes happened on both sidelines, Cunningham and Lairy looked to be in mid-season form. They stymied the run and were a consistent presence in the backfield when the Wildcats attempted to throw the ball. The pressure applied to quarterbacks, Dre Shumaker and Camden Sanders caused errant throws and led to interceptions by Tyler Rupert, Leondra Thompson, and Kentavious McMillian. The pressure by Cunningham and Lairy led to a safety in the fourth quarter. It also led to a big play on conversion downs. In the second quarter, Louisville faced a fourth-and-1 on West Point's 36-yard line. A blitz call led to Cunningham shooting the gap and meeting the running back before he hit the line of scrimmage. The turnover-on-downs proved important as it halted one of Louisville's few positive drives.

West Point's defense also responded in the final minute of the first half. Following Elijah Wilkes' 32-yard field goal, the Wildcats recovered an onside kick. But West Point;s defense swarmed on the next three plays.

Cunningham had eight tackles, a tackle for loss, and a sack. Lairy had seven tackles, including two for loss, and two sacks. They combined for three of the Green Wave's five sacks.

The defense has seven sacks and four interceptions in West Point's first two games. The starters have allowed three points.

"Defense can win or lose games on any given night," Lairy said. "We have to be the pulse of the game and set the tone. The linebackers, specifically, we are the core. We snuff out the run, help the secondary stop the pass. It's always going to be a whole defensive effort.

West Point capitalized on the pressure by the linebackers to turn defense into offense in the first half. After Rupert's first-half interception set up great field position, West Point scored six plays later when Brandon Harris connected with Treddis Anderson on a 23-yard touchdown pass. The score created a 10-point margin in the second quarter, as Jose Lemus added his first of three extra-point kicks.

"The whole week, we understood how big of a game tonight would be," Rupert said. "Tonight, it was a defensive game, and our defense was the best."

Though West Point had a sluggish first two quarters, the offense pieced together its best drive coming out of the locker room. Dantariyus Cannon sparked the march with a 14-yard dash. Anderson caught a 25-yard pass from Jake Chambless to set up Kam Martin's 3-yard touchdown run two plays later. The drive -- 10 plays for 62 yards -- was West Point's longest series of the night.

Louisville veteran coach M.C. Miller said the first series of the second half changed the momentum.

"We thought we would be ready to play in the second half, but we couldn't stop them on the opening drive," Miller said. "(West Point) broke off several big plays that series. West Point has a very good team. Give them credit. We couldn't handle the full four quarters against them tonight."

In the fourth quarter, Cannon had a 57-yard rushing touchdown. Louisville closed the scoring on Kevon Jackson's 66-yard punt return in the final seconds of the game.

In the end, West Point stretched its winning streak to 30. It will face one of its biggest tests at 7 p.m. Friday night when it travels to long-time rival Starkville.

"We really do not think about the winning streak," Lairy said. "It is a new season. It is a new team, a new week every time we go onto the football field."