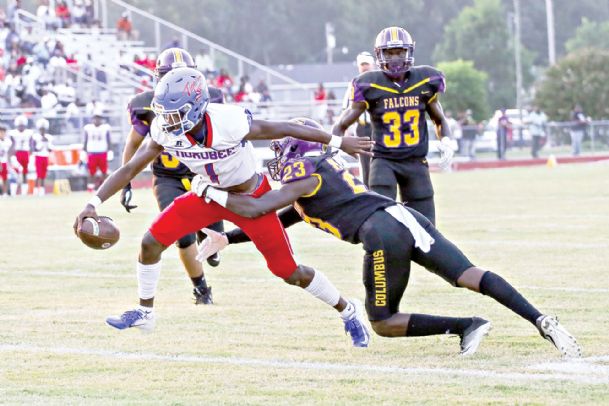 Noxubee County High School senior quarterback Maliek Stallings reaches the football across the goal line for a touchdown in the first quarter Friday night in Columbus. Photo by: Chris McDill/Special to The Dispatch

Still, the plan was good enough for a 35-12 victory against Columbus in a Mississippi High School Activities Association (MHSAA) matchup Friday night at Falcon Field.

"We had two quarterbacks out," Noxubee County senior Maliek Stallings said, "so that meant I had to go back there and do what I could to help the team win. The offensive line was incredible. They won the game for us."

Stallings threw for 2,442 yards and 22 touchdowns his sophomore season. Last year, he moved to wide receiver and cornerback as Armoni Clark took over at quarterback and helped lead the Tigers to the MHSAA Class 4A State title. College coaches have pegged Stallings as a defensive player on the next level.

On Friday, Stallings moved back under center with junior starter Kristopher White and all-everything senior Kyziah Pruitt not dressed due to injury.

Stallings was 11-for-20 for 92 yards. Noxubee County had 43 carries for 344 yards. It was the second-straight week the Falcons allowed 8 or more yards per rush.

"Survive," Shorter said. "That was the key word for tonight. We were going on the road playing a tough team wanting to rebound (from a loss in week one), just like we were. With so many players out we just wanted to survive. It didn't matter how we won. It was just win. We can worry about style later. Tonight, we wanted a win."

Noxubee County had at least eight players on the sidelines not in uniform. Against the Falcons, the goal was to run the football, melt the clock, and find a way to get to 1-1.

"I am really proud at how we played all things considering," Stallings said. "The offensive line was great. They made it look easy. We know later in the year we will be a different team. You still have to line up and play. Football is fun. We wanted to find a way to make this fun."

Noxubee County made it fun behind a dominant performance from the offensive line.

"The game plan was simple," Smith said. "A week ago, we didn't play up to our capabilities (in a loss to Starkville). This game was much better. Everybody came together, and the offense had a good night."

Columbus intercepted Stallings twice in the first half. One of those thefts in the red zone helped keep the teams tied at six at halftime.

Noxubee County capitalized on a big break midway through the third quarter. A mishandled quarterback to running back exchange fell into the hands of linebacker Marlon Windham, who raced 52 yards for the go-ahead touchdown.

After a punt, Noxubee County used the read option to perfection on an eight-play, 67-yard drive. All of the plays were rushes. The Tigers converted two huge third downs before Stallings scampered untouched 18 yards into the end zone on an option keep.

Columbus then drove inside the Noxubee County 20-yard line. This time, Windham had another huge defensive stop with an interception on a batted ball in the end zone.

"I would like to have seen the defense play better," Shorter said. "We gave up too many yards in the running game (36 rushes for 204 yards). It's really hard to say that with conviction, though, when you get four turnovers."