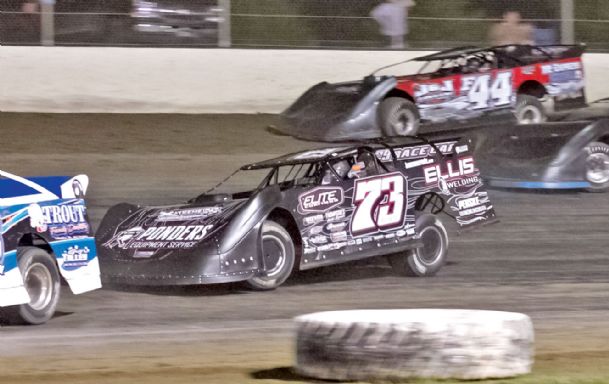 It doesn't matter where Evan Ellis starts the race because he always finds his way to the front.

Ellis, who has dominated Durrence Layne Late Model racing this season, typically starts on the front low, leads the majority of the laps, and takes the checkered flag.

Occasionally, he'll start fourth or fifth and won't make a move to the front until later in the race, sometimes with just two laps to go.

Ellis had one of those nights Sunday at Magnolia Motor Speedway. A gutsy pass in traffic saw him take the lead on lap 14 and win his 15th feature of the season.

Ellis knifed under Spencer Hughes and Klint Byars entering the second corner of a re-start after Byars jumped the cushion and Hughes slid under him.

"I kind of already had all that played out in my head on the re-start," Ellis said. "I chose high in the Dixie double-file, and I had a good feeling Spencer was going to get a good start and pull a slide, which was going to bow both of them up. I got in there, set my car up to try and turn under them, and man, it worked out just like that. Thank goodness there wasn't a caution that made us go back to the previous lap."

Byars led the majority of the race prior to Ellis' pass.

Ellis said the key to finding his way to the front late in races has been aggression ... and luck.

"If I'm trailing somebody, I tell myself I got to get up on the wheel," Ellis said. "I make sure I hit my marks and do everything right, and it pays off. Sometimes I get a break or two."

The win is Ellis' 14th Durrence Layne weekly points race. The win should bump him ahead of Sid Scarborough in the national points table.

Ellis' dominant winning percentage is illustrated by the disparity in points races between the two, as he has competed in 24 fewer races than Scarborough.

Ellis will compete in the Cotton Pickin' 100 and North Alabama Speedway's King of the Crates later this month, where the winner will receive $3,000 and $5,000, respectively.

Shelton, who totaled his car at Whynot Motorsports Park earlier in the weekend, raced Roman Ponds' No. 15 MasterSbilt Late Model, and delivered a dominant performance.

Shelton started on the pole and led every lap, but Russ Brasel challenged him with seven laps to go. Brasel ran the bottom, while Shelton ran the top, and a brief misstep in turn one saw Brasel pull even. The pair went three-wide with a lap-car when they came back around to turn one, but a caution re-set the field on lap 17.

"When I saw (Brasel), I sort of stepped it up a little bit, and then we had a caution," Shelton said. "I had to choose at that point, to continue the high side or go low, but I'd lived the whole 17 laps up there, so I decided stick it here. I pretty much held it wide open.

"But I went into one and two a little too hard and sort of lost it going to the wall and got a little loose," Shelton said. "I really had to step it up to keep ahead of him. But I was glad caution came out so I could cool my tires off."

1. Ben's burning questions: What to make of this week's college football news and more LOCAL COLUMNS