Volunteers shake off latest adversity to improve to 3-0 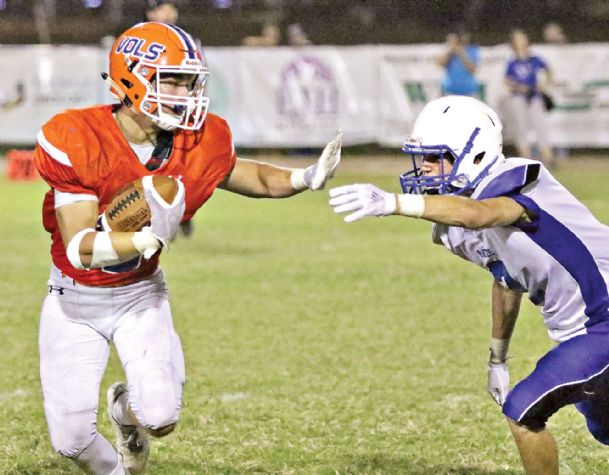 Starkville Academyâs Taylor Arnold rushed for three touchdowns last week in a victory against Indianola Academy. Photo by: Jim Lytle/Special to The Dispatch

STARKVILLE -- The pictures and plaques on the left and right walls of the Starkville Academy field house take you through the years and the successes of the football program.

Started by former coach Jeff Terrill and continued by current coach Chase Nicholson, the pictures feature numerous Volunteers in various forms of celebration. The plaques, a touch Nicholson has added to complement recognition of the team captains, list the names of the most accomplished individuals in several statistical categories.

Through all of the pictures and the accolades, the Starkville Academy football team has weathered adversity. The difference in the Volunteers of recent memory is they have had more success dealing with the ups and the downs that accompany a marathon that is a prep football campaign.

The latest step came Friday in a 20-14 victory against Indianola Academy. The game featured the 2017 participants in the Mississippi Association of Independent Schools (MAIS) Class AAA State championship game, which Starkville Academy won 21-14 in overtime last November in Jackson.

Taylor Arnold rushed for three touchdowns to help Starkville Academy (3-0) overcome an interception return for a score on its opening possession to win a matchup Nicholson hopes helps a 2018 team building an identity develop even more confidence.

Nicholson doesn't want to take away from what the game could help this year's accomplish, but he also doesn't want it to affect his team's focus as it prepares for its game against East Webster at 7 p.m. Friday. Nicholson said the 2017 team was able to re-focus following a 35-21 loss to Indianola Academy in the regular season. He said the Volunteers learned from the adversity of that one -- their only one in 2017 -- and were able to withstand the usual bumps and bruises that tried to knock them off course the rest of the way.

This season, Nicholson has the confidence Starkville Academy will be able to follow a similar path because he feels the team has strong leadership, led by Garrett Smith, Will Miller, Walker Tranum, and Arnold. He also likes how numerous players have taken advantage of their chances to play and made impressions. As a result, he feels the team's depth has grown and the competition within the group has increased.

Nicholson smiled Tuesday as he recounted Lewis, the team's quarterback, coming over to him and saying, "Why did I throw a pick on the first play?" Nicholson said the Volunteers scored a touchdown two or three plays later to put them back on course to win at home. Just as Lewis was able to flush the memory of making a mistake, he said the Volunteers have to move past the excitement of beating a team that is expected to be one of the challengers for the 2018 state title and prepare themselves for the next round of adversity. There is no telling when it is going to come or what form it is going to take, but Nicholson wants his players to be ready for when it hits because he knows it is coming.

"I eat it up," Nicholson said. "I love watching those guys rise up over adversity and punching it in the face, and keep punching it until it is over. That is fun. That is football."

Judging by the pictures on the walls outside Nicholson's office, the Volunteers followed that plan under Terrill and now under his leadership. He stressed at the beginning of the week that the team couldn't afford to stall and become complacent after three wins. He said there is no indication this group will be any different from past Volunteers pictured on the walls.

"It is on us and them to continue to get better," Nicholson said. "If we keep getting better, the shelf life our team has a chance."