New Hope falters in second half of loss to Shannon 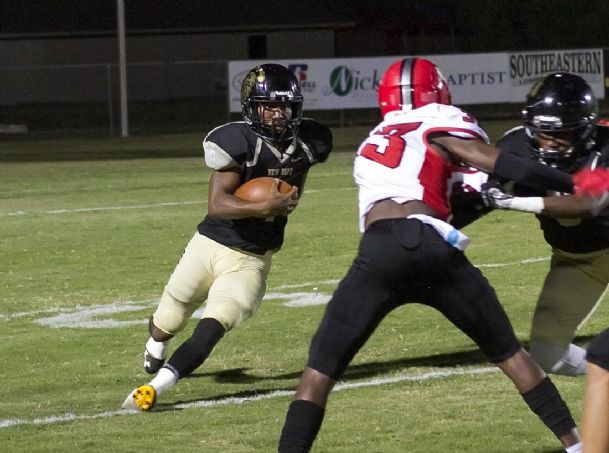 New Hope running back Braylen Miller (1) looks for room to run against Shannon Photo by: David Miller/Special to The Dispatch

Explosive plays were a unicorn the New Hope Trojans had been chasing through three games. So when Ryan Burt connected with De'ajon Miller 50 yards down the field Friday, it appeared the Trojans had caught them one and knew where to find more.

Braylen Miller would score from 2 yards out later in the drive, and New Hope trailed Shannon 14-7 at the break. But the Trojans would go three-and-out on three of their four possessions in the second half, eventually falling to the Red Raiders, 26-7.

The Trojans (0-4) have scored just 21 points through four games and have been shut out twice this season.

First-year New Hope coach Wade Tackett said the vibe at halftime "was up," and the team had confidence they would be in the game.

"The kids are really good at making the adjustments we ask them to make. The good thing about this team is, no matter the score, they never get down. They fight until the end, and that's something that will pay off for us down the road."

In the meantime, the Trojans will continue navigating a road littered with injured players and inexperience. Starting left tackle Brantley Prescott is out for the season after an injury sustained last week, and defensive end Kobe Chandler will likely miss his second game next week due to a concussion. In all, Tackett said the Trojans have lost seven starters to injury since opening weekend.

The loss of Prescott is particularly troubling because the offensive line is inexperienced. The unit has struggled to open up running lanes for Braylen Miller, who had the Trojans' only score but finished with just 11 yards on 17 carries.

"It's not scheme," Tackett said. "And the kids are smart and know what they're doing. Maybe it's a lack of confidence - most of them are young and new to it. We had some young guys (on the offensive line), all juniors and sophomores, and even a freshman for most of the night. They're trying to build confidence in knowing if what they're doing is correct."

Tackett said their mission in the second half was to push the ball vertically, especially to De'ajon Miller, a player Tackett said "can make things happen." But the senior had just the one catch in the game, and Burt mustered just 121 yards and completed 12 of 21 passes. The struggle was illustrated perfectly on New Hope's final drive of the game, an 11-play march that featured a 16-yard completion to Trey Bailey on fourth-and-5 before Burt got drilled and whipped the ball into the sideline four plays later.

"We're moving the ball, but we're not putting points on the board," Tackett said. "The running game isn't what we want it to be, but that gives us a goal to work towards."

New Hope's defense continued its inspirational play at all three levels, despite being stretched to all angles of the field by Shannon's passing game. SHS quarterback Jordan Gilleylen went 22 of 33 for 248 yards and three touchdown passes of 24 yards or more.

The Trojans broke up five passes and recorded a pair of sacks. They forced two fumbles and recovered one, including a strip-and-scoop inside their own 10 in the first quarter. They were unfortunate to lose another fumble recovery when officials blew the whistle early on a dumped lateral. The play would have set up the Trojans in Shannon's red zone in the second quarter.

"[The defensive line is] a deep group for us," Tackett said. "We got some playmakers in that group. They've taken Coach (Seth) Stillman's defensive scheme, they rep it every day and make strides in games. But they're also getting a little nasty attitude about them, which is something we're trying to build in them."