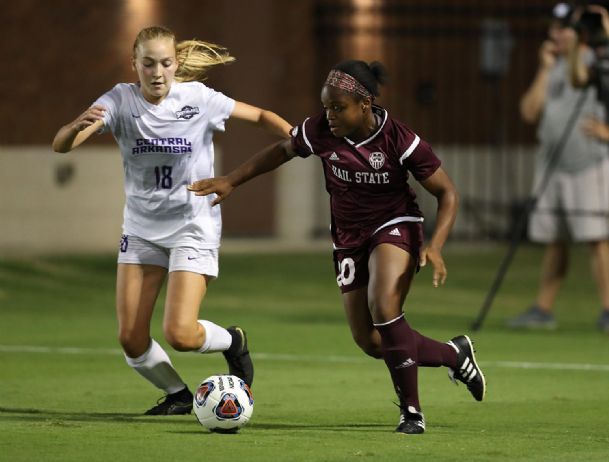 STARKVILLE -- Hope never has been an idle feeling for Monigo Karnley.

It's why the Liberian native took a bus and then ran a mile in an effort to be on time for a training session with a club soccer team.

It's why Karnley, a 5-foot-4 freshman midfielder, traveled from Georgia and then stayed in a dorm room overnight by herself prior to participating in a Mississippi State women's soccer team ID camp.

It's why a young woman whose name means "to seek God" never has allowed fear to prevent her from finding her path and setting out to realize her goals.

"Monigo is a very independent person," said Constance Jarbie, Monigo's aunt, who welcomed her niece into her home in Pennsylvania. "When she wants to do something she will focus on it and she will meet her objective. She tries her best to do all she can and she always gets what she wants."

Karnley, who is majoring in aerospace engineering, is averaging nearly 25 minutes off the bench in MSU's six matches. She will look to help MSU (6-0) complete an undefeated run through the non-conference slate at 1 p.m. Sunday against Louisiana Tech at the MSU Soccer Stadium.

"We knew after the (ID) camp she really had some special moments, and she has them even here in college," MSU coach Tom Anagnost said. "We saw what we saw and we were right."

Monigo, which is pronounced Moh-NEE-go, is from Liberia, a country with a population of more than four-and-a-half million, in West Africa. She has lived in the United States for four years, and came to Starkville by way of Boothwyn, Pennsylvania, where she lived with Jarbie and her family. She attended Chichester High School in Pennsylvania.

Karnley had been playing soccer for years when she arrived in the U.S. In an effort to play at a higher level, she reached out to the Penn Fusion soccer club to see if she was good enough.

Scott Bissett, director of camps and programs with the Penn Fusion Soccer Academy, said Karnley didn't get off to a good start when she was 15 minutes late for her first practice. He said Karnley was sweating when she arrived and told him she had taken the bus and then ran a mile from the bus stop to practice. Bissett's initial concern about Karnley's commitment quickly dissipated.

"She was very technical," Bissett said. "It was kind of a wow factor in what she did."

Bissett said Karnley did things technically others only imagined they could do. He said she went by players like they weren't even there and realized Karnley was a "special" player.

But Bissett said Karnley didn't get to play with the Fusion right away. In fact, he said she wasn't initially cleared to play due to U.S. Soccer and FIFA guidelines. Even though she trained with the club for two years, he said this past year was Karnley first playing.

"It was around February that our administrator (Diana Urbanski) got the news she was cleared," Bissett said. "She remembers she had never heard such a happy reaction to finding out she was cleared to play soccer."

Karnley had a similar reaction when she learned she had earned a scholarship to play soccer at MSU. She recalls grabbing her stuff by the last dugout, taking off her cleats by the trash can, and being asked to see Anagnost in his office. She said she couldn't believe it when Anagnost told her he wanted her on his team.

Karnley had two of her three assists last Sunday in a 4-0 victory against Austin Peay. She showed creativity when she fed Gabriella Coleman for the Bulldogs' third goal. Karnley displayed vision when she took on a defender along the endline and passed the ball back to the middle for a streaking MaKayla Waldner, who powered it home for the final score.

MSU associate head coach Matt Kagan said Karnley displayed those skills and more at the team's ID camp in July 2017. He said the coaching staff didn't know anything about Karnley, but they quickly discovered they needed to do a lot of research to find out as much as they could about her. He feels Karnley has had a positive effect on the team in a short amount of time.

"I think she has rubbed off on a lot of the kids in terms of mental toughness and maturity," Kagan said. "For a kid who is so young, I think she is very mature and still has a little of room to grow in those areas. She is positive and is a great life force on our team. I think all of those experiences say a lot about her as a human being. She is a great person first. That is what I love about her."

Whether Karnley has had to catch a bus and run to a training session with the Fusion club team or to put aside her fears to shine in a college setting, she has done whatever it takes to realize her goals.

Jarbie said her niece has had that attitude since she was little. She said Monigo didn't want to follow in the footsteps of other family members who have worked in the medical profession, which is why she chose to study aerospace engineering. If the combination of academic and athletic responsibilities sounds like a lot to handle, Jarbie said Monigo's focus will allow her to do it.

"She is somebody who knows what she wants to do," Jarbie said. "When it comes to something she really wants to do, she has no fear. ... She is not going to pay attention to things that might distract her so she will always get to where she wants to go."