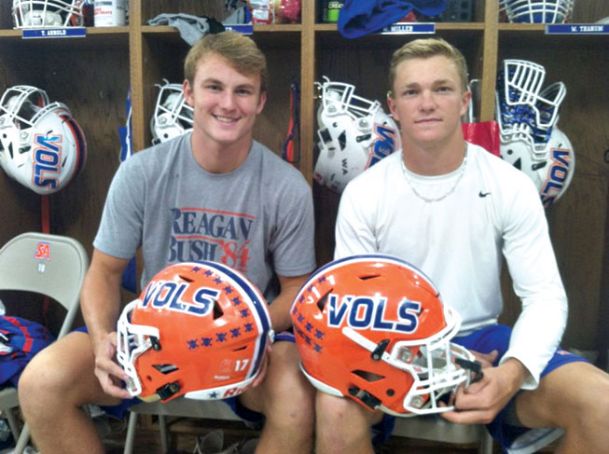 STARKVILLE -- The Starkville Academy football team's defense is on a championship pace.

You only need to look at the swath of blue stickers on the helmets of Howell Archer and Will Miller as proof. The Starkville Academy coaches award skull and cross bones stickers every week to the team's top defensive players. Stickers also are handed out to the Volunteers' top performers on offense and special teams.

After last week, though, you'd be hard pressed to find someone who didn't receive a sticker for their efforts in a 51-0 victory against East Webster. Archer and Sam Clark returned an interception for a touchdown, Miller was part of a solid showing by the defensive line, Ben Guest recovered a mishandled snap in the end zone for a touchdown, and Campbell Spivey blocked his second punt of the season as part of an all-around dominating effort.

For their efforts, Archer and Miller are The Dispatch's Prep Players of the Week.

"You want a defense that is opportunistic when it comes to scoring points," Starkville Academy coach Chase Nicholson said. "We want them to put points up. That is part of a great defense. We expect to have a great defense and to play hard and when the opportunities come they take advantage of them."

The win helped the reigning Mississippi Association of Independent Schools (MAIS) champions improve to 4-0 ahead of a matchup against Magnolia Heights at 7 p.m. Friday. The effort helped the Volunteers keep pace with some of the program's top defenses. Last season, Starkville Academy allowed 87 points through four games but grew stronger and finished with six shutouts, including three in a row in the Class AAA playoffs, before it finished the season with 138 points allowed en route to the program's seventh state title.

This season, Starkville Academy has two shutouts and has given up 34 points. That total is on pace with the 2014 team that also recorded six shutouts and finished the season with 123 points against.

In 2005, Starkville Academy's state title team surrendered only 10 points through the first four games and finished with only 96 allowed. That team played only 12 games.

Starkville Academy will have a hard time eclipsing that mark simply because it will play 14 games if it gets back to the Class AAA state championship game. The defense is doing all it can to ensure the Volunteers will earn a return trip.

Starkville Academy defensive coordinator Brad Butler said the Volunteers are relying on a back seven filled with experience. He said Miller, who moved from linebacker to the defensive line last season, is working well with newcomers up front to stabilize that group.

"They understand their fits and they play hard," Butler said, when discussing how each player works together to do their jobs. "I think we're playing harder than our opponents, and we have to be that way because we're not very big. We have some speed back there, but we're not very big and we have to make up for our lack of size with our effort and our speed."

Butler said the coaches set the tone from the first day of practice when they tell the players they're not going to play if they don't play hard. As a result, he has seen plenty of the young players "bite as puppies" when they first join the program. Now, with so many older players who have come up through the ranks, Butler said those "puppies" have grown into "dogs" who are biting even harder.

Butler said Miller made the transition to defensive line last season that was designed to get his brother, Matt, more playing time at linebacker. He said an injury at quarterback forced the Volunteers to move Noah Methvin to quarterback and Will Miller responded by saying he could fill that void.

Butler said Archer emerged as a sophomore and has continued to develop. He said Archer and Taylor Arnold make sure the members of the secondary make the right calls to guarantee the correct coverages.

"I think they have a great understanding of what we're trying to do defensively," Butler said.

Archer hopes that understanding leads to more opportunities like the one he had Friday night when a convoy helped lead him into the end zone. It was his first interception return for a touchdown since last season.

"I kind of saw the lineman's hat pop up on the pass and I just tried to get back to my zone," Archer said. "He happened to throw it right to me.

"It kind of surprises me (that the defense has played so well), but I knew we had a lot of people returning from last year, and last year we were pretty good. I was hoping we could keep on rolling this year, and we have so far. Last year, we trusted each other, and that trust has kept on building this year."