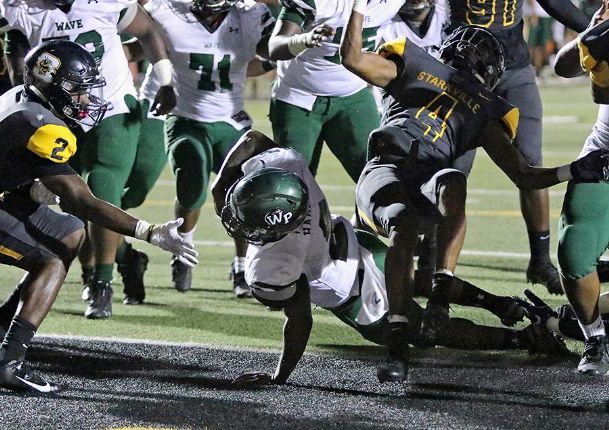 Brandon Harris and the rest of the West Point football team found the end zone often Friday night in a 41-0 win over Noxubee County. Photo by: Jim Lytle/Special to The Dispatch

Special to the Dispatch

WEST POINT - Chris Chambless might not be the biggest fan of the bye week.

The West Point High School football coach held a bitter taste in his mouth for two week after his team fell to Starkville, 23-7. The loss snapped a 30-game winning streak.

On Friday night, Chris Chambless and the Green Wave settled back on their feet against the Noxubee County Tigers. Though it was sloppy and sluggish at times, West Point looked to have resettled before Region 1-5A competition began next week.

"I hate open week open weeks to start with," Chris Chambless said. "They're necessary if you plan to make a deep run in the playoffs. A 12-game season could be rough.

West Point (3-1) picked up its first shut out and scored 28 points in the second half for a 41-0 win. The decision was the sixth straight over the Tigers.

"We were a little sluggish, things got rolling but I am very proud of my guys," Chris Chambless said. "Noxubee County is a well-coached team. They were prepared for us. On our end, we messed some little things up in the first half, and we just have to be more mentally prepared for those things the next week.

"I haven't slept well in two weeks. I know my guys haven't either, and it is good to finally get back on the winning track."

West Point secured a 13-0, first-quarter advantage. Brandon Harris scored on an 18-yard on his first carry of the game. Jake Chambless, who completed 7-of-17 passing attempts, found TJ Anderson on an 8-yard strike with six second left in the opening quarter.

However, two momentum-turning, defensive stops maintained West Point's lead and shut out during the second.

The momentum-shifting plays also occurred in the other facets of the game. John Facella and Ryan Melton recorded punt blocks, setting up touchdowns in the first and fourth, respectively. Brian Crawford recovered a kickoff at the Noxubee 10, assisting in the game's final touchdown, and Tyler Rupert recorded 90 total return yards.

"We work extremely hard in the (special teams) area of the game," Chris Chambless said. "Sometimes it gets frustrating when we mess up in that area, because I know, the staff knows and the players know, how hard we work in it. Hopefully, as the season continues, we make more plays then we miss."

After a 26-23 loss to Meridian last week, Noxubee's performance against West Point was not indicative of a team on the upswing. The Tigers gained 119 total offensive yards and earned only seven first downs. The defense did not fair well either, surrendering 279 yards.

It was the first shut out for the Tigers (2-3), who have at least scored in their four previous games.

"I don't really have any words for tonight's game," Noxubee Head Coach Tyrone Shorter said. "West Point has a good football team. In the second half, West Point brought it to us. Week-after-week, I don't know what to expect out of this football team.

"I thought we had a great game plan coming into the game, and West Point was more physical than us."

Though the loss was hard to grow off because of the result, Noxubee linebacker Marlon Windham was a menace. Windham collected a team-high seven tackles as he flew around the tackle box.

"(Windham) comes to play every day, and I wish I had more like him," Shorter said.

West Point finally pulled away for good on its second possession after the intermission. Harris' second touchdown capped a 70-yard drive, as the junior athlete raced 30 yards untouched into the end zone.

The Wave added scores from Shun Crawford's 31-yard reception and a pair of rushing touchdowns from Kameron Martin and Reco Bailey in the fourth.

West Point opens Region 1-5A against the Lafayette County Commodores on Friday. Noxubee County faces a road trip to West Monroe in Louisiana.