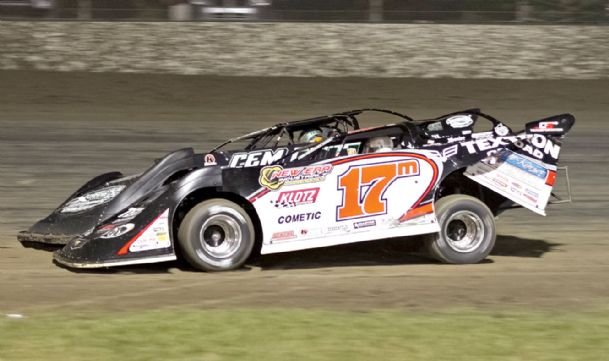 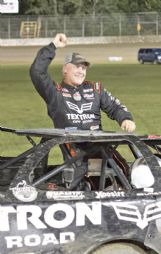 Brian Rickman finished fourth in the Cotton Pickinâ 100 Saturday at Magnolia Motor Speedway.
Photo by: David Miller/Special to The Dispatch

Dale McDowell's patience paid off Saturday in the Cotton Pickin' 100.

The National Dirt Late Model Hall of Famer took the lead on lap 55 after floating in the top five for the first half of the race. McDowell held true to the middle and bottom, mastering a "touchy" surface after an unexpected rain shower early in afternoon softened the track. He later held off a last-lap charge by Austin Rettig to win the 70-lap, $12,000 top prize.

"There was more bite in certain places, but anywhere there was bite, it was rough," McDowell said. "You're just trying to aim and hit the holes right, so the biggest thing is just be patient and (then) try to cross them on the gas and just kind of float across them or slow down and drive straight through them.

"Anytime the track is like that, I think it's good. There's a lot of good passes for the lead and makes it fun for the fans."

The win is McDowell's seventh of the year and biggest payout this season.

McDowell said he battled tightness when he tried the top Friday, when he finished second in a 30-lap feature, and Saturday night. He said he found his lane Saturday about midway through the race, when he committed to the middle and bottom.

"I was sitting there patiently, and those guys would hit and push. They'd run on top a little bit and go back to the bottom," he said, "so I just took care of our tires, knowing we'd be better on that long run. That's why I really hated to see that last caution come out because we had that big lead, and I didn't know what to do."

The last caution flew on lap 68, but Rettig, who said his right rear lost compression after a shock broke, couldn't take advantage of it.

"I think my canister came loose. It was dangling no the right rear shock and blew the shock out," Rettig said. "That happened about three-quarters of the way through. ... The car started dipping real hard and getting real tight.

"(After losing the shock) it was more about being patient than fighting it, and making sure I hit my lines. I knew Dale wasn't going to mess up. ... Luckily he did there (on the re-start), and I thought we had something when he bobbled a little bit in (turn) two getting in."

The Durrence Layne Late Model feature field completed just 13 of 50 laps in a $3,000-to-win feature before rain washed out the race, along with the rest of the show. Track officials explored finishing the slate Sunday, but the forecast wasn't favorable. Magnolia will announce a makeup date this week.

This year's Cotton Pickin' featured a new format that saw the addition of a Super Late Model feature to Friday's slate. Chris Ferguson set the fast time and held off McDowell and Moyer in a 30-lap, $4,000-to-win feature.

Magnolia had 62 Super Late Models this year, 20 more than the 2017 Cotton Pickin'. This weekend's races featured 50 more cars than a year ago.

When racing resumes, Ben Keith will sit on the pole for the Mississippi Street Stocks Series feature race. Keith, who debuted his new No. 14 car a little more than a month ago, hopes to add a win to a third and second-place finish in his last two races at Magnolia.

Justin McRee, Matt Byram, Jason Hollis and Wyatt Hill will round out the rest of the top five.

Tyler Burgess will start on the pole in the 602 Sportsman feature, while Justin McRee, Jamie Pickard, Russ Brasel, and Nick Thrash will round out the top five starters.