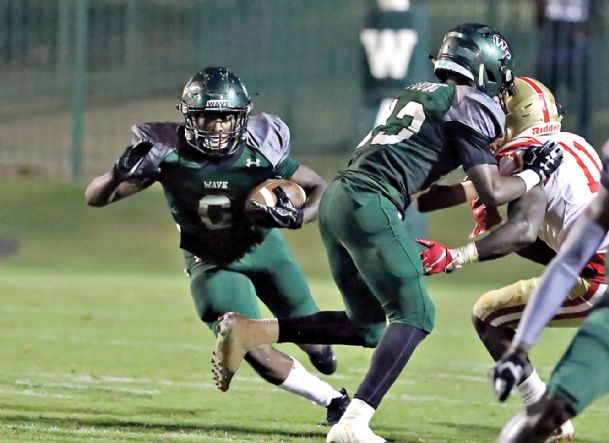 A team with lowered expectations can be even more deadly.

There is no such thing as the West Point High School football team flying under the radar. A state championship pedigree has made that impossible.

That being said, some years have a higher ceiling from football followers in the state of Mississippi than others.

The 2018 West Point football team is somewhere in between.

The team won all 15 games. Its closest margin of victory was 20 points in the regular season and 19 in the postseason.

Showing how difficult it was to complete that mission, many have said the same dominating things about Starkville this season in Class 6A.

However, Starkville proved an undefeated run is harder than it might appear, losing to Northwest Rankin 27-20 last week in a Class 6A, Region 2 game.

Many also said the same thing about the Ricky Woods-coached Starkville team in 2014. That squad won its first 13 games before losing a halftime lead to South Panola in the North State championship game.

Even Marcus Murphy wasn't enough to help West Point go undefeated in 2016. The Green Wave lost to the Yellow Jackets and had to settle for 14-1 and the Class 5A State championship.

Unlike last season's predecessor, this West Point team took the field without the labels of "dominant" and "not capable of losing."

It also took the field with the same expectation coach Chris Chambless has for in his clubs.

The formula has added up to a successful start to the 2018 campaign. West Point is 5-1 and 2-0 in Class 5A, Region 1 play. This week's opponent is Lake Cormorant, which also is considered a region contender at 4-2 and 2-0.

Overall, West Point has won 22-straight region games dating back to a loss to Oxford in the region opener of 2015, but the gap in the region is tighter than it was a year ago.

West Point owns a 14-13 victory against Lafayette. Lake Cormorant is expected to provide a test.

Next week, West Point will face Olive Branch. The Conquistadors are 6-0 and 2-0. Olive Branch is also most likely smarting from two losses to West Point by a combined score of 90-13.

It is human nature for teams to get geared up for a bite of a reigning state champion after that championship squad loses several talented players to graduation.

So far, West Point has weathered the storm nicely. Even a 23-7 loss to Starkville found West Point holding a 7-6 halftime lead before it wore down in the second half.

On the ground, there has been a lot of balance. Junior Brandon Harris, junior Dantariyus Cannon, senior Kameron Martin, and junior Jimothy Mays have rushed for 226 or more yards. As a team, West Point is averaging 212.7 yards per game with 18 rushing touchdowns.

A year ago, West Point could break a game-changing run on any snap from Murphy or Chris Calvert. That luxury is gone. However, the 2018 team plays hard, plays with effort, and it understands its identity. West Point knows what it wants to do and does not shy away from that.

On defense, the Green Wave are solid with good speed and good size. They don't produce as many turnovers, but they play assignment football and do it well.

Hattiesburg continues to be the favorite in Class 5A. A year ago, West Point beat Hattiesburg 41-15 in the state championship game.

It's a safe bet Hattiesburg will be excited about a potential rematch as much as Olive Branch will be next Friday night, but don't count out West Point. The silent teams sometimes carry the largest sticks.