Kelly has Caledonia in position to earn playoff berth 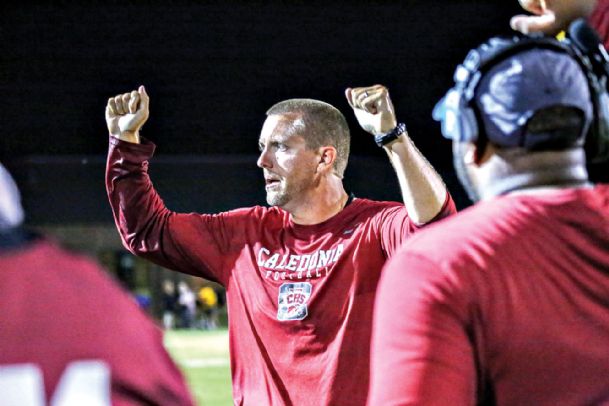 Caledonia High School football coach Michael Kelly celebrates after getting doused with the contents of a Gatorade cooler following his teamâs victory against New Hope. Photo by: Chris McDill/Special to The Dispatch

This time, it just feels different.

Coach Michael Kelly is the latest to try to change that.

"They have not had many people who wanted to build," Kelly said. "It has never been set up to have success and then more success. It's a unique situation with a lot of potential."

To the casual observer, a 34-20 victory against Mooreville isn't that big a deal. For Kelly and the Confederates it was a very big deal.

"Had a long talk with the parents after the game," Kelly said. "I am not sure if you are say we are ahead or just where we should be. I do know it's a major step forward. To us, this win is a big deal. It's the first region win of the season and it's a starting point."

Caledonia almost made even bigger headlines Friday night in a heart-breaking 28-27 overtime home loss to Pontotoc. The Warriors are the region leaders and considered a Class 4A State title contender.

The victory against Mooreville snapped a six-game, three-season losing streak in region play. The last region win came at Leake Central on Oct. 28, 2016.

That was also the final regular-season game in the four-year coaching career of Andy Crotwell. Crotwell had one of the best group of athletes to come through the program and parlayed his team's success into the job at North Pontotoc.

After losing so many seniors off that team, Caledonia finished 0-10 in Ricky Kendrick's return to the sidelines for a one-year stint.

A winless season would scare off some candidates from taking the job. Kelly, a four-year defensive coordinator at Columbus High School, viewed it in a different light.

"Saw this is as a situation where things could only get better," Kelly said. "The kids have been through a lot. From the beginning, you saw a group of players who were hungry. They were willing to work. They were ready to learn."

Kelly guided Columbus through spring drills under new coach Eric Rice. The offer to coach Caledonia came after another option was also exhausted right before school was out.

"This is a good school with adequate facilities," Kelly said. "There is no reason they can't be competitive in Class 4A ball. A little short on numbers and a little short on size, but we will be working on that. When you get players out and they feel like they are being treated fairly and having a good time, well then more players want to come join."

This writer saw Caledonia twice last season -- in a 14-0 loss to West Lowndes and a 31-0 loss to Itawamba AHS. In both games, the Confederates didn't cross midfield. On defense, there were some playmakers. Most had sophomore by their name in the program.

"What has stood out is the number of raw athletes we had," Kelly said. "If you look at the record from last year, that's a little deceiving."

One more region win would mean a playoff berth. It almost came in an upset of the region leaders.

Crotwell led Caledonia to the playoffs twice in his four seasons.

Caledonia isn't ready to bust into the upper echelon of Class 4A. However, Caledonia defeated New Hope for the first time since 13 years, so the team appears to be trending upward and toward stability.

"We had a stretch where we had nine or 10 ninth-graders on the field," Kelly said. "You don't want to do that in Class 4A. It has caused some growing pains this year. It will mean for better things for the program in the long run."

Kelly said the sophomore is class has 22 members. That's more than the junior and senior classes combined.

It might take time, but Kelly will build it. At Caledonia, any push forward would be appreciated.