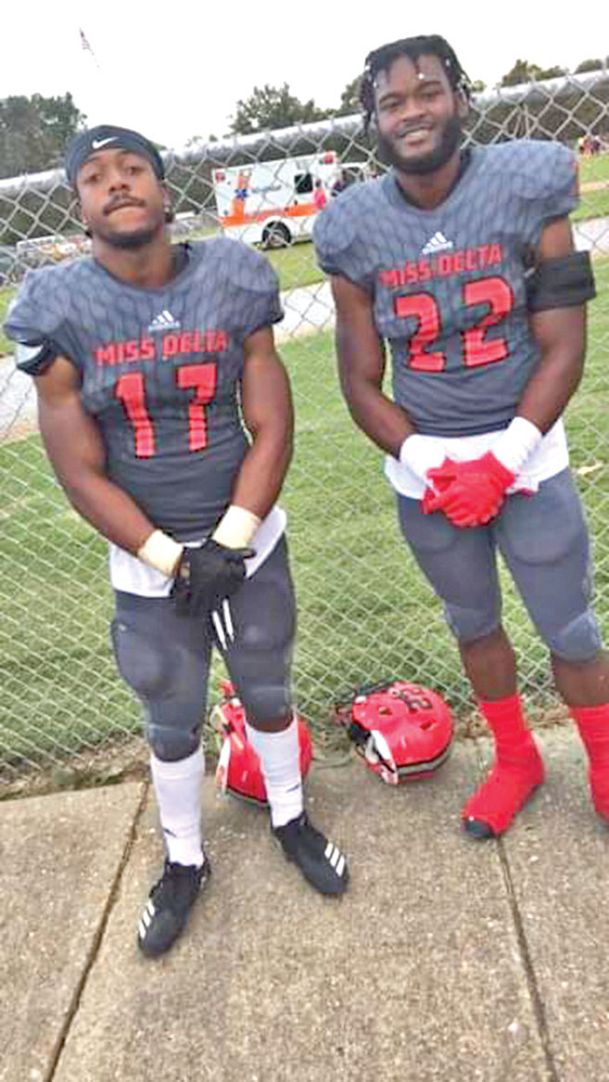 To avid followers of the Mississippi Association of Community and Junior Colleges, a three-game winning streak by Mississippi Delta Community College might be a rather surprising turn of events.

However, MDCC freshman defensive back Isaiah Karriem saw it coming from his first week on campus.

"We have been working hard since May 28th," Karriem said. "There has not been a day off. A lot of young players on this team, but a great attitude. It was just a matter of time before we put things together. Even in the losses early, you saw a team getting better each week. I just had been waiting for that big breakthrough."

Karriem and Patrick Jackson, his fellow former Columbus High School teammate, have made major contributions on one of the best MDCC teams this decade.

MDCC improved to 3-4 and 3-2 in the MACJC North Division with a 34-28 victory against Itawamba C.C. on Saturday on Homecoming in Moorhead. The winning streak includes victories against Coahoma C.C. (27-26) and Northeast Mississippi C.C. (41-11). It is the program's longest in more than 10 seasons. The Trojans had lost 21 straight games before the resurgence.

"This team only has 10 or 11 sophomores on it (out of 55 total players)," Karriem said. "I think that is the biggest advantage we had. Most of these players had not been around here for all of that losing, so it was come in here, work hard, and hope for the best. From the beginning, I knew we had some talented players. (Jackson) and I talked about it after the first week of practice. It's like we have too many good players to lose a lot of games."

"Just learned a lot about adversity," Karriem said. "I think that kind of put me in the right mind-set for coming here. Football was still fun and (losing games) had not broken me. This was a chance at a new start. The goal was to come in and make plays and try to help the team win."

Jackson struggled to gain his footing as Columbus' leading rusher in his final prep season. The move to junior college ball has given Jackson another chance to be counted on to move the sticks.

"This chance is what you make of it," Jackson said. "The coaches have been great. They believed in the both of us. Our job was to come in and make an impact."

Jackson has rushed for 411 yards and four touchdowns as the Trojans' primary ball carrier. His first 100-yard game (128 yards) came against ICC. Karriem has 21 tackles, two sacks, and a forced fumble.

"After the first couple of games, it all became human nature, you just have to realize you belong in this league," Karriem said. "Once you figure that out, it all becomes natural. Each week, you are going against some great offensive players. Some of these players have played (NCAA Division I) ball at big schools. Now, it's your job to go against them.

"In (high school) Class 6A ball, you go against some premier players. The only difference here is there are so many more of them. You can't take any player lightly, any team lightly. Everybody out here has a point to prove."

Karriem and Jackson had a point to prove when they signed their scholarships.

"We just wanted to be in that group that helped turn this thing around," Karriem said. "I know those are big expectations. As an athlete, you always believe you can do anything. After some early practices, I felt a lot better in that prediction. With so many freshmen, the buy-in has been strong."

MDCC has a chance to continue winning. It plays Saturday at Holmes C.C. (3-4) this week and closes the season against Pearl River C.C. (0-7) at home.

If MDCC beats Holmes C.C. and ICC beats Northwest Mississippi C.C. the following week, it also would be in the tiebreaker discussion for a playoff berth.

"A winning season would be unreal," Karriem said. "Then we can come back as sophomores and show the younger guys the way of doing things around here."