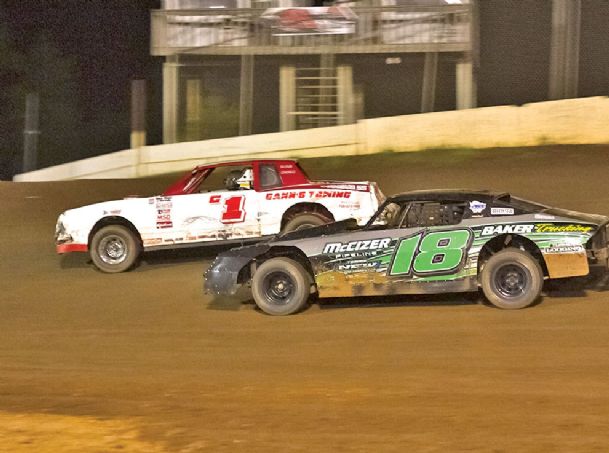 Corey Gann (G1) held off Johnny Pannell to win the Factory Stocks feature in July at Columbus Motor Speedway. Factory Stocks racers will compete for a $3,000 top prize Saturday at Columbus. Photo by: David Miller/Special to The Dispatch

Rod Taylor had a grand vision to rehab the "state's oldest dirt track" when he took over Columbus Speedway in the winter of 2016.

From the bleachers and race surface to the skyboxes and the events at the venue, Taylor was motivated to turn the once shuttered bullring into a destination for dirt track racing.

It hasn't been easy. Taylor has had to tailor his schedule to shift back and forth from Friday to Saturday night races to accommodate other tracks in the region. Dwindling support from the 604 Late Model Division has seen it removed from weekly points races.

But Taylor continues to check off boxes as he enters the season finale of his second full year as track caretaker: Saturday's Southern Factory Stock-Pure Stock Nationals. Earlier this season, Taylor acquired a grader to better prepare the track surface. He also has repaired and repainted some of the tracks walls. Last offseason, he replaced busted pipes in the restrooms.

"I'm not going to say we went backwards this last winter," Taylor said. "But the bathrooms are still something that need to be addressed."

Updating restrooms is on Taylor's list of upgrades this offseason, as is removing a section of grandstand bleachers to create a grassy terrace where fans can sit in lawn chairs. Taylor said he will add a "couple hundred loads" of red clay to the race surface, and he plans to close off the track exit and alter the current on ramp to accommodate on-and-off traffic.

Taylor hopes the upgrades move the dial in fan and driver support of the track.

"It's taken a while to sit back and look at what's most important for the racers and the fans," Taylor said.

Taylor has taken proactive and reactive approaches in addressing concerns of fans and racers. Saturday's race is an example of the unorthodox decisions he has taken to re-brand Columbus Speedway. Taylor is one of a handful of promoters who embraces the lower divisions of racing. Saturday will mark the fifth time the track has hosted a Factory Stock feature with a winner's payout of $1,000 or more.

Columbus will pay $3,000 to the Factory Stock winner this Saturday. The slate also will feature $1,000-to-win features for Sportsman Late Models and Street Stocks. No Durrence Layne 604s or Super Late Models will be featured this weekend, as has been a trend in weekly shows this year at the track.

Nearly 30 drivers have pre-entered the Southern Factory Stock-Pure Stock Nationals. Drivers from Alabama, Mississippi, Louisiana, and Oklahoma have committed to the race. Hedging big payouts on lower divisions poses a risk to the track's budget, but Taylor sees it as a necessary experiment and said he likely will run just as many top-bill Factory Stock features in 2019.

"When you don't get the support in some divisions, you have to explore new avenues and look at different things," Taylor said. "You have to think about what you can do that's best for the track and what's best for the sport. It's one of those things -- call it a guinea pig, if you will -- but I'm one that's willing to listen and try different things. You don't know until you try."

A key cog in Taylor's optimism for the future is sponsor support. He has a lengthy list of sponsors that are providing various levels of financial support this weekend. He admits that sponsorship money "doesn't flow like it used to," and that corporate sponsorships aren't an option, but the racing community does what it can, from sponsoring fast-time awards to banner advertising.

For this weekend's race, Taylor said sponsorship money will cover the winner's payout in the Factory Stock race. The rest of the payouts are left to Taylor.

"I would like to see more sponsorship money on board," Taylor said, "but our small businesses and racing community have been generous and supportive of Columbus Speedway."

Taylor added his operation is a "people business," a mind-set that has influenced adding numerous divisions throughout the year, from Outlaw Streets to Hot Shots. The track recently added the Tommy Dove Young Guns division to honor former racing supporter and youth mentor Tommy Dove, who passed away in August. Racers 17 and under can compete in the special Hot Shots division.

"Tommy was a mentor to a lot of kids, not just here, but in North Mississippi," Taylor said. "The kids are the future of our sport, and it's up to us giving them a place to race."

1. Ben's burning questions: What to make of this week's college football news and more LOCAL COLUMNS