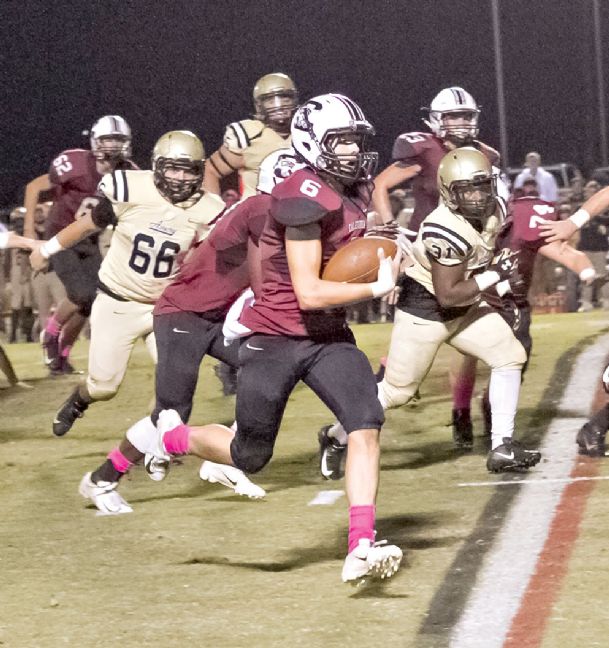 Caledonia High School quarterback Brandon Edmonson runs the ball against Amory on Friday night. Edmondson had 13 carries for 72 yards and a touchdown. Photo by: David Miller/Special to The Dispatch

By Don Rowe, Special to The Dispatch

On Friday, senior K.C. Ivy scored on a two-point conversion late in the fourth quarter to lift Amory to a 35-34 victory.

Amory trailed 34-27 with a little more than three minutes to play, but it drove 90 yards in 1 minute, 48 seconds to pull within a point of a tie. After kicker Bryn Camp came on for what appeared to be the tying point-after kick attempt, Caledonia was penalized half the distance to the goal and Amory coach Allen Glenn elected to go for the two-point conversion and the win.

Ivy, running behind a massing interior offensive line that averaged 280 pounds per man, made his coach's decision pay off.

The loss wasn't without several controversial calls that went against the luckless Confederates. In the first half, Caledonia was flagged for a horse-collar penalty that the Caledonia coaches disputed. It set up an Amory touchdown.

Then, prior to Amory's game-winning drive, freshman Darrius Triplett scored on a 48-yard run that would have made it a two-possession game with a little more than four minutes to play. But the line judge on the opposite side of the field penalized the Confederates for having five players in the backfield. The guilty player, however, claimed he had checked with the referee and was told his was lined up correctly -- a call that incensed Caledonia's coaching staff.

"That was the back-breaker," Caledonia coach Michael Kelly. "We go up two scores and it's a different ballgame."

Later in the fourth quarter when it appeared Amory was going to go for the tie with hopes of sending the game into overtime, Caledonia was flagged when a player substituted for failing to get off the field in time -- a call that was heavily disputed by sideline observers standing within yards of the incident.

"It is what it is," Kelly said, referring to the quality of officiating in Mississippi high school football.

In a post-game talk with his players, however, Kelly stressed the Confederates couldn't let calls that go against them affect their play.

"We can't get mad at the officials when calls go against us," Kelly said. "With us, it's the same thing week after week -- missed tackles, missed blocks, missed assignments. As a team, we've got to learn to make the plays when we need to make the plays."

Although a late first-half on-sides kick recovered by 5-foot-6, 165-pound linebacker Cooper Jones didn't directly result in an Amory score, it set up a go-ahead touchdown minutes later when Caledonia forced a three-and-out and took possession when Camp's punt was downed on the 17-yard line.

Caledonia quickly turned the ball back to Amory, however, when a fumbled snap on first down was recovered by Shaidon McKinney. It set up a 2-yard keeper by Hunter Jones and a Camp kick for a 27-20 lead with 31 seconds left in the half.

The game was a study in contrast, as the teams combined for 56 points in a first half that featured four of the seven touchdowns covering 24 yards or more and four scoring drives that came on two lightning-fast back-to-back possessions.

After the first-half fireworks, the second half turned into a defensive struggle.

Caledonia's initial possession netted -6 yards, but Amory's resulted in an eight-play, 69-yard drive capped by a 15-yard keeper by Hunter Jones for a 6-0 lead.

The Confederates tied the score two minutes later on a 49-yard sprint to the end zone by quarterback Brandon Edmondson. Less than two minutes later, Ivy bolted untouched straight up the middle for a 59-yard touchdown to make it 13-7. After missing on his kick, Camp nailed his second after holder Will McComb handled a less-than-perfect snap.

Undaunted, Triplett ripped off a 44-yard kickoff return to give Caledonia a first down at the Amory 47. An 8-yard pickup by Edmondson on a fourth-and-4 moved the ball to the 33. A 16-yard pickup by JeDarius Gore on a third-and-9 was followed by his 15-yard scamper for the score. Wes Rollins' point after knotted the game at 13-13 early in the second quarter.

The Confederates broke the tie on their next possession, a five-play, 56-yard march that ended with a 38-yard touchdown run by Triplett thanks to a key block by Camden Hurst. Rollins booted his second kick to make it 20-13 with 7:11 left in the second quarter.

Amory responded with a nine-play, 73-yard drive to tie it at 20 on a 24-yard run by Ivy followed by Camp's second kick on the series that the horse-collar penalty took place on a play the Panthers lost 2 yards on a third-down try.

Camp then delivered two pooch kicks out of bounds on the ensuing kickoff, but on his third try -- an onside kick -- Cooper Jones came up with the ball to retain possession for Amory at the Caledonia 45.

Despite a dropped interception, the Confederates forced a stop to force a punt that was downed at the Caledonia 17 with under two minutes left in the half.

McKinney's recovery of the fumbled snap one play later set up Hunter Jones' 2-yard plunge with 31 seconds left in the period and, along with Camp's point after, gave the Panthers the lead at 27-20.

That lead didn't last long, as Edmondson hooked up with Gore on a 73-yard pass-run play on which Gore got behind the secondary, made two great cuts, and outraced two defenders thanks in part to A.J. Gore running interference for him. Rollins' point after tied it at 27 with eight seconds left until halftime.

After holding Amory on a fourth-and-one at its 36 to start the second half, Caledonia ran out the clock in the third quarter with a 14-play, 67-yard march, capped by Edmondson's 2-yard keeper with 15 seconds left. Rollins added his fourth kick to give the Confederates their last lead, 34-27.

Amory mounted a long drive to reach Caledonia's 23 on its ensuing possession, but Darquez Williams sacked Jones for a 9-yard loss on a fourth-and-11 to hand the ball back to the offense.

Three plays later, Cooper Jones fired up the Amory fans when he recovered a fumble, but his heroics went for naught as the Panthers were penalized 15 yards for a face-mask violation. Triplett then quickly deflated the Panthers with his 48-yard scamper, but his touchdown run was called back on the five-men in the backfield call.

Unable to move the ball for a first down, Caledonia's punt was downed at the Panther 10. After a short pickup, Hunter Jones converted a 42-yard gain on third down before being stopped at the Confederate 42. A 10-yard pass completion to Braxton Griffin, plus a 15-yard mark off for a second horse collar violation, gave Amory a first down at the 17.

Sawyer Schiefelbein and Alex Mathews temporarily put a halt to Amory's scoring effort when they sacked Jones for an 8-yard loss at the 25. But Jones found Trendon Gillon open on the next play and the senior wide receiver made it a one-point deficit with 1:21 remaining.

Ivy's two-point plunge following the too many men on the field penalty was the game winner.

Caledonia had one last shot, but Griffin's interception at the Amory allowed the visitors to run out the final 57 seconds.

"They gave us plenty of chances to win, but when it came down to having the game on the line, we miss about four tackles and their quarterback gets loose in our secondary," Kelly said. "We didn't come up with stops on a couple of crucial third-down plays and we haven't been able to make plays on defense all year. We're young over on defense, and we're not real good and, as a result, we spot too many people too many points.

"When we get to the point where we can make the plays, we'll be a good football team. We just have to keep pulling on that rope and get things going in the right direction."

Glenn was relieved to get out of Caledonia with a win to keep his team's playoff hopes alive.

"My hats off to Caledonia," Glenn said. "They're a good football team that took Pontotoc to overtime, and we are fortunate to leave here with a win."

Glenn said the game was a tale of two halves.

"Offensively, we played well the first half and not so much the second half," he said. "We stepped it up defensively in the second half, and that put us in a position to win.

"It was a gutsy performance on our part, a great team effort, and I'm proud of our guys."

Pontotoc and Shannon, both 5-0, face off next week for the top seed in the region, while Itawamba Agricultural (2-3), Amory (2-3), and Caledonia (1-4) are battling for the third and fourth seeds.

Barring an upset, Amory, which will play host to Mooreville (0-5) on Senior Night on Friday, should have a lock on third place. If that's the case, the winner of the Caledonia-IAHS game in Fulton should be the No. 4 seed.

"Our season can end next week or we can play on depending on the outcome of the game," Kelly said.