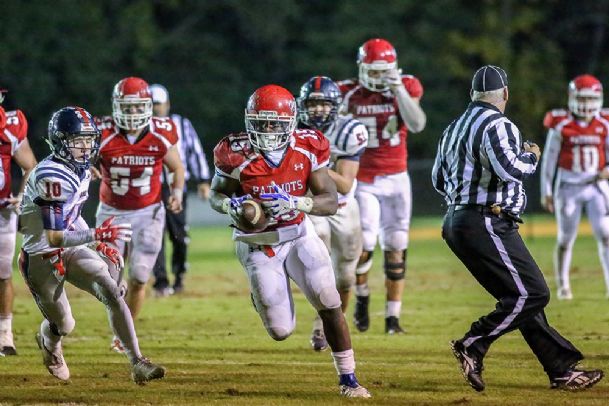 Sean Harrison believed in July the 2018 Heritage Academy football team had a chance to play for a state championship.

The third-year Heritage Academy coach felt the Patriots had enough skill position players to stack up with the best in the state. He also thought Heritage Academy would be a year older and better on the offensive and defensive lines to help it stay alive until the third week of November.

Harrison's confidence has proven to be justified as Heritage Academy has been explosive on offense and dominating on defense. At 7 p.m. Friday, it will try to take the final step to its destination when it plays host to Adams County Christian School in the semifinals of the Mississippi Association of Independent Schools (MAIS) Class AAA playoffs at C.L. Mitchell Field.

"We have been run heavy, but we can throw the ball to five, six, seven different guys when we want to," Harrison said. "It's not a run, run, third down we have to throw it. We are able to take what the defense gives us.

"It has been kind of aggravating because for me because that's all I have heard about is ACCS' athletes and nobody is talking about ours."

Last week, No. 2 seed Heritage Academy (10-2) stretched its winning streak to seven games with a 43-13 victory against No. 7 Leake Academy at C.L. Mitchell Field.

Junior quarterback Carter Putt leads Heritage Academy's offense. Junior running back Kelvin "K.J." Smith is the leading rusher, while senior Moak Griffin provides multiple options as a runner, thrower, and receiver. Receivers Jared Long, Noel Fisher, Banks Hyde, and Lex Rogers are just four of the options the Patriots can turn to if they want to spread teams out.

On defense, the front of Eli Acker, Clay Walters, Fox Walters, Ethan Bumgarner, and Seth Harris has been to be a dominating presence. Since a 28-20 loss to Pillow Academy on Sept. 14, Heritage Academy has allowed only 83 points (a little more than 11.8 per game). The maturation of linebackers Griffin, Austin Dotson, Rocky Wright, Parker Ray, and J.R. Lott and a secondary of Fisher, Long, Rogers, Hyde and has solidified a unit that has proven to be downright stingy.

"We'll play a game I will say, "I really think that is the best we got,' " Harrison said. "You come out against Leake this past Friday night and it was the most dominating performance I have seen out of them. It has really been a lot of fun to watch them."

According to the MAIS website, ACCS was forced to forfeit its first seven games due to an ineligible player. The Rebels, who haven't lost on the field this season, likely would have been a top-five seed by virtue of winning District 5.

Against Starkville Academy, senior quarterback Sterling Yarbrough was 11-for-19 for 293 yards and five touchdowns. The Rebels relied on big plays to beat the Volunteers. The first came on a 25-yard pass to Jakarius Caston that beat double coverage. Yarbrough also hit Caston on a 48-yard jump ball to help set up a 31-yard touchdown pass to Yohan Thompson. The pass to Thompson also beat double coverage thanks to Yarbrough putting just enough loft on the ball to help it sail over the arms of one of the defenders.

Harrison wants his players to treat the game as a "reward" for all of the hard work they have put in since May. He acknowledges the Rebels do a good job and have good athletes, but he feels the Patriots will be just fine if they execute and tackle.

Just as Harrison has believed in his team since the spring, he said it has remained poised on the ultimate goal. It hasn't allowed big moments to mess with its focus, and Harrison doesn't think that will be the case this week, either.

"We have kind of had a chip on our shoulder all year," Harrison said. "We really felt like nobody else thought we were a state championship contender. We felt some teams we have handled in the past felt like they were going to get us this year. The kids have done a good job of not letting that be lip service and staying focused on their work to prove people wrong."

The winner will advance to face the winner of the game between No. 1 Indianola Academy and No. 4 Central Hinds at 7 p.m. Saturday, Nov. 17, at Jackson Academy.