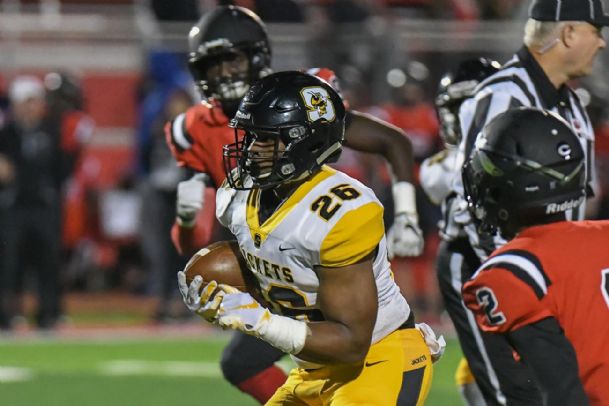 STARKVILLE -- Derwin Ferguson still has the clip, and looks at it regularly.

A television camera caught him crying on the field in the aftermath of the Starkville High School football team's loss to Pearl in last year's state championship game. It's easy for him to remember the feeling when he sees it; it's also an easy source of motivation for the offensive linemen and fellow seniors trying to finish this season the right way.

"Really, I'm excited," Ferguson said. "We've got a great chance to get back to the championship and do great things."

A run back to the Mississippi High School Activities Association (MHSAA) Class 6A state championship game starts 7 p.m. Friday against South Panola, but the senior class has more than a championship at stake: it could make itself one of the best senior classes in school history.

Ending their final season as champions would go a long way toward establishing that legacy, but something they can do in the meantime is become the school's single-season scoring leaders. This year's Yellow Jackets (10-1) have scored 514 points, tied for third in school history with the 2015 team coached by current South Panola coach Ricky Woods. They are 15 points behind the 2014 team and 25 points behind the record-setting 1995 team.

The senior class enters the playoffs 30-8 in their its seasons, 21-0 at home. They've done so in dominant fashion, averaging 34.7 points per game to their opponents' 13.1. Against the school's rivals of Noxubee County, Oxford and West Point, the class is 8-1.

Granted, all of the resume points are rendered moot if they aren't accompanied with a 2018 state championship.

"It's really about experience more than anything," Ferguson said. "We've been through a lot of stuff, especially that championship. With us knowing how to get there, now we have to work on finishing."

Ferguson said he has seen a different level of intensity from his teammates this week, but he see it as the result of any edict from seniors. Coach Chris Jones has seen business as usual, but he doesn't see the locker room -- he learned as a player that it's best to let that be a players-only space.

Jones doesn't believe a new level of intensity is the answer -- "You should be in playoffs mode every day once district begins" -- but is not above using playoff-specific motivation.

He uses last year's championship game the same way. The program knows it did not finish and it has built its season around finishing this time.

"As a player, you have to create your own legacy," Jones said. "You can't live your life based on what the people before you have done. It's OK to respect and understand the tradition, but you have to leave your own mark.