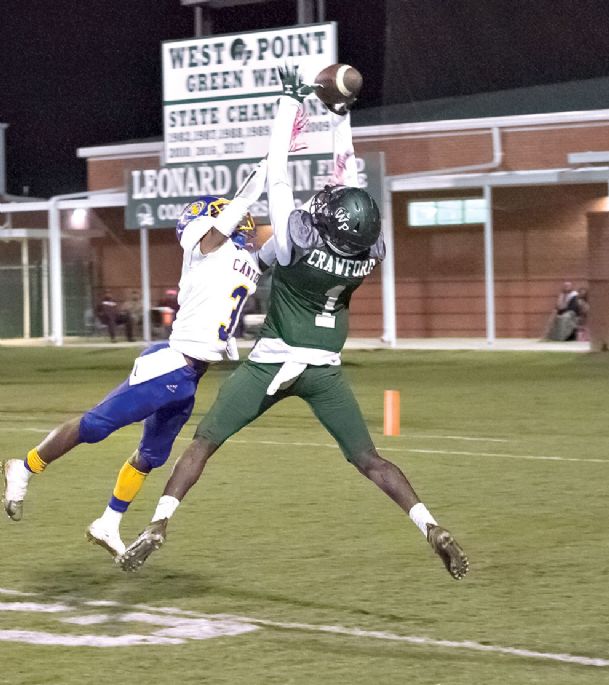 LEFT: West Point receiver Shun Crawford (1) tries to haul in a pass against Canton. Photo by: David Miller/Special to The Dispatch

In the opening round of the Mississippi High School Activities Association (MHSAA) Class 5A playoffs, West Point received the Canton's best shot Friday night. However, the Green Wave, in typical fashion, had the right counterpunches to deliver the knockout blow.

"We didn't have a great second quarter, but we settled down in the second half," West Point coach Chris Chambless said. "Canton came in averaging a lot of points and used that prolific offense. They did a great job. We just kept playing our brand of football and pulled away.

"We got what wanted (to play Lafayette), and I know Lafayette got the rematch they wanted, too. It's going to be a heck of a ball game."

West Point (11-1), the two-time reigning MHSAA Class 5A champion, advanced to the quarterfinals with its ninth-consecutive win. Canton, the No. 4 seed from MHSAA Region 2, completed its season at 7-6.

West Point will play host to Lafayette, the No. 3 seed from Region 1, at 7 p.m. Friday at McCallister Field. West Point defeated Lafayette 14-13 in the regular season. Lafayette (9-4) defeated Germantown 40-13 on Friday night in Madison.

"There's no day's off, especially with Lafayette coming to town," said Harris, who led the rushing attack with 12 carries for 124 yards. "It is going to be a high-intensity ballgame. It'll be a whole different ballgame. We have to fix mistakes from the last game (we played against Lafayette) and come back harder."

Canton had enough firepower to challenge the Region 1 champions and make it uneasy at times in the first half. However, West Point led 35-20 at halftime and pulled away in the second half.

Following the Tigers' three-and-out to open the third quarter, the Green Wave manufactured an 82-yard, run-only series. It included big carries from Dantariyus Cannon, Jaylun Eggerson, Jimothy Mays, and Harris. West Point capped the possession with Martin's 6-yard touchdown run on the 10th-play for a 42-20 advantage.

In the fourth quarter, Jake Chambless connected with Eggerson, who dragged a defender into the end zone for a 14-yard touchdown. Mays provided the exclamation point with a 25-yard touchdown rush.

"Kameron Martin and all our running backs really get this offense rolling," Chris Chambless said. "We know when these backs get their number called they're going to give us everything they've got."

"At halftime, we talked about playing with more heart and making sure we took care of the business in front of us," Griffin said. "We stunted a lot better as a defensive line. We gave (Canton's) quarterback a little more pressure after halftime."

"We stepped up in needed spots, and we had some other guys grab some reps tonight," Chris Chambless said. "We were able to play some more guys tonight, coming back from injury or stepping up, and it's going to help us down the stretch to be fresh up front."

West Point built a 21-0 advantage in the opening seven minutes. Kameron Martin capped a 65-yard, five-play series with a 15-yard carry. Tyler Rupert added a 55-yard interception return to add to the lead. Brandon Harris scored a 21-yard touchdown run to cap a four-play possession to give West Point the three-touchdown advantage.

Ryan Melton added an 80-yard kickoff return, the Green Wave's first kickoff return touchdown this season. The score created a 28-6 advantage by the end of the quarter.

Canton rallied to score the final 14 points of the half. Jontarius Brown (21-for-33, 228 yards, three touchdowns, one interception) threw an 18-yard strike to Jaiden Burns. After Jake Chambless' second interception of the quarter, he added a 4-yard touchdown on a quarterback keeper to close the deficit to 15 points.

West Point, which is 40-2 in the past three seasons, inched closer to the program's second three-peat. The Green Wave accomplished the feat during the 1987, '88, and '89 football seasons. This team hopes to do it once again and secure the program's 10th title.

"The three-peat is something we want to do for this community, this city," Harris said. "We like to bring home the gold balls. It would be a blessing to do one more time."