West Point's Harris adds to tradition of No. 2 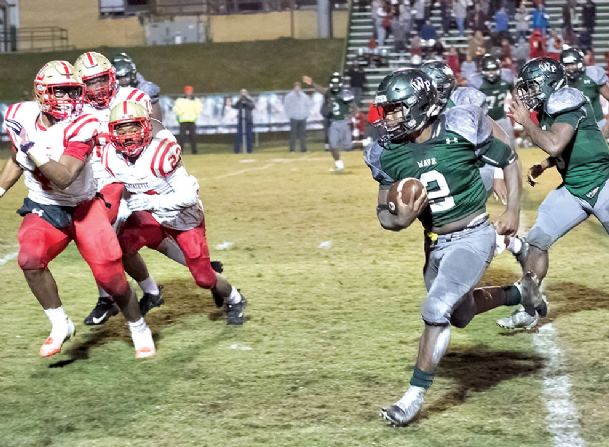 Running back Brandon Harris played a pivotal role in the second half to help the West Point High School rally past Lafayette County on Friday night. Photo by: David Miller/Special to The Dispatch 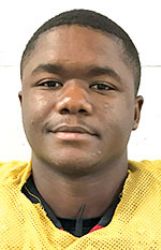 WEST POINT -- When the West Point High football team needed someone to step up in its game against Lafayette County in the quarterfinals of the Mississippi High School Activities Association (MHSAA) Class 5A playoffs.

Hybrid athlete Brandon Harris, who wears No. 2, exploded offensively in the second half. Just like Justin Cox, a two-time state champion in 2009 and 2010, and Marcus Murphy, who won state titles in 2016 and 2017, Harris earned postseason glory Friday to add to the tradition of the jersey number.

"The guys who have come before, Marcus Murphy and many others, have mentored me to this position, and gave me the rock to carry," Harris said. "They have taught me a lot of what I know on this football field. It is a blessing."

The junior rushed for 76 of his 124 yards in the third and fourth quarters and scored West Point's final two touchdowns in the second half in a 27-20 victory at McCallister Field.

For his accomplishments, Harris is The Dispatch's Prep Player of the Week.

"When we went to halftime, coach let me know I was going to get the ball in my hands," Harris said. "He told me to lead this team. We got better and better as we played through the game. We have things to clean up by Friday, but it was a blessing on Friday night."

Harris helped the Green Wave rally from a 14-6 halftime deficit. He returned the opening kickoff 26 yards and used his longest run of the night -- a 25-yarder -- to set up Kameron Martin's 6-yard touchdown run early in the third quarter.

Harris continued his heroics out of Green Wave's "beast-cat" formation, which utilizes a direct snap and pulling offensive lineman and fullbacks to clear space for the ball-carrier.

"(The formation is) beast. That is what I am, a beast," Harris said. "When you see the beast-cat formation, you are going to see deuce."

Harris caught snap after snap and stayed behind his blockers and shoulder pads to pound the defense. His 11 carries after the intermission averaged 7 yards per touch.

"As a staff, we know Brandon Harris can carry the workload but that can be said about all our running backs," West Point coach Chris Chambless said. "When their number is called, they answer it."

Harris scored a 6-yard touchdown by breaking two tackles and diving into the end zone on third-and-goal with 3 minutes, 8 seconds remaining in the third quarter. The score set up Jake Chambless' two-point conversion pass to Sema'J Harris that tied the game at 20.

In the opening minute of the fourth quarter, Harris capped a four-play series with his 7-yard carry. He utilized three blockers to barrel across the goal line and give West Point its only advantage of the night with 11:20 to go.

"We had to keep pushing for the lead and finally got through in the fourth quarter," said Harris, who also scored in the second quarter. "Lafayette is a very good team, and I know they gave us their best shot."

In the MHSAA Class 5A opening round, Harris rushed 12 times for 124 yards and scored two touchdowns -- one on the ground and one through the air -- in a 55-27 victory against Canton.

Through 13 games, Harris has 144 carries for 872 yards and 16 touchdowns. He also has completed six passes for 120 yards and two touchdowns and caught 15 passes for 133 yards.