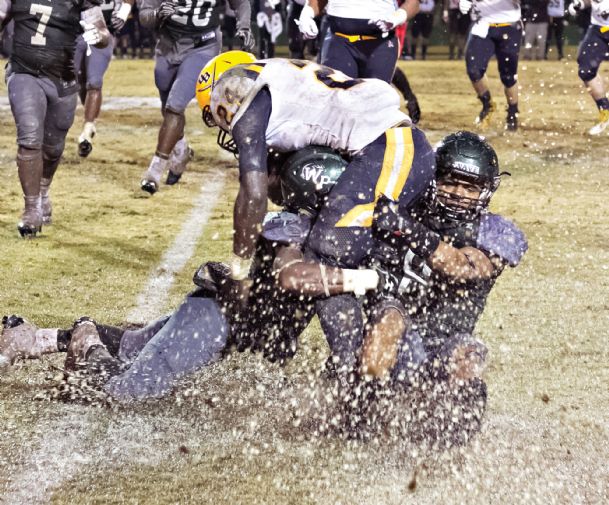 WEST POINT -- In each of the last two weeks of the Mississippi High School Activities Association (MHSAA) Class 5A playoffs, the West Point High School football team has faced rematches against teams that had success running the football against its defense.

Lafayette ran for 254 yards, and Olive Branch had 172 yards and three scores on the ground in the regular season. West Point won both games by a point.

On Friday, West Point followed its dismantling of Lafayette last week with a suffocating run defense that held Olive Branch to 94 rushing yards and 95 total yards of in a 35-0 win in the semifinals of the Class 5A playoffs at McCallister Field.

West Point (13-1), the two-time reigning Class 5A State champion, has surrendered just 103 yards of offense in its last six quarters.

Olive Branch scored 33 points in a home loss to West Point in the regular season.

West Point head coach Chris Chambless said his team, like most, hit a "midseason lull," but it rebounded.

"If you lose a game in the playoffs, you're not practicing Monday," Chambless said. "You always go as your seniors go, and they've done a good job leading us, just like last year's seniors. They want their legacy to be state championships, just like the last two groups.

"When you're a sophomore and don't step on the field very much, it's very easy to lose interest, and maybe say, 'I'm gonna come back next year.' But our guys don't do that. They hang in there, play scout team every day, get beat up -- but they get to celebrate victories just like everybody else. The seniors this year, a lot of them did it for two years."

West Point lost a strong group of seniors on defense from the 2017 team, but the Green Wave entered the 2018 campaign with a "rinse and repeat" motivation, said Jaylen Cungious, senior defensive end. Though they'd won back-to-back state championships, the "doubters" motivated the Green Wave.

"People were saying we weren't going to make it because we didn't have Marcus Murphy, Zay (Xavier) Fair, Terence Cherry and the rest of the guys," Cungious said. "Those guys were good, but we were also part of that team."

Cungious has led West Point with eight-and-a-half sacks and 17 tackles for a loss, which is nearly double his production from the previous year. He credited the last two groups of seniors for laying a blueprint of success for the 2018 senior class, from how to watch film to how to lead.

But in growing as a defender, he has paid even closer attention to individual traits in technique and style of play.

"Even guys my 10th-grade year -- Terrence Cherry, Everitt Cunningham, and Ledarius Glover," Cungious said. "Cherry's get-off on the ball; Glover, how he contained the quarterback. Everitt, not letting people get outside of him.

"I've progressed every year, and once you start coming up and learning, the experience shows you what you need to work on."

The strength of this year's senior class showed Friday -- Quantaze Powell intercepted a pass -- was needed because the Green Wave were without starting senior linebackers Brentt Cunningham and Brian Crawford.

"With other guys out there, we know we don't have all our bullets, but we can still go out and not miss," Chambless said. "We just got to be more accurate."

Chambless said Cunningham and Crawford have a chance to play against West Jones.