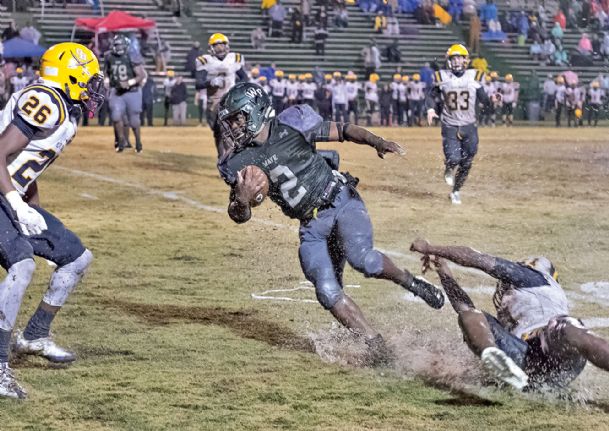 WEST POINT -- In a steady rain and on a muddy surface, acceleration and cuts were at a premium Friday night at McCallister Field.

It was easy to toss out the modern era's finesse brand of football. Rather, the old-fashioned style of bruising strength was the better option.

As a result, West Point had 54 carries for 450 yards in a 35-0 victory against Olive Branch in the Mississippi High School Activities Association (MHSAA) Class 5A semifinals.

"We were locked in all week, and we knew we were going to play our brand of football no matter the conditions," West Point coach Chris Chambless said. "We practice in it. We play in it. We had fun doing what we do -- playing West Point football."

West Point punched its ticket thanks to its second victory against Olive Branch. In the regular season, the Green Wave edged the Conquistadors 34-33.

Brandon Harris had 18 carries for 233 yards and two touchdowns. Harris, a junior athlete who had 172 yards at halftime, praised the effort of his offensive line for his career-best game.

"My offensive line is full of hogs," Harris said. "Hogs are going to be nasty up front and set the line of scrimmage in front of them. They blocked and got up field to the next level.

"All I saw tonight was green grass and water. We kept moving our feet through the mud and didn't stop."

The Green Wave entered the postseason averaging 246 rushing yards per game. In the first three rounds of the playoffs, West Point has gained 1,145 yards, an average of 382 yards per game.

"We have an offensive line that can roll you off the football," Chambless said. "Our running backs can take a beating, and it's great to have three or four backs who are willing to do the pounding. Coach (Brett) Morgan and Coach (Casey) Welch and the entire offensive staff do a great job of preparing our guys for Friday nights. Without this entire coaching staff, this wouldn't be possible"

West Point scored on its first play when Harris took a direct-snap sweep, tip-toed the sideline, and raced 85 yards to the end zone. He used excellent blocks to get loose and then relied on a convoy of pulling linemen to create space down the sideline.

"We had to play better than we did against Lafayette," Harris said. "It was West Point football tonight. Coach Chambless always says, 'The first team to flinch is the one that is going to lose.' We didn't flinch first tonight."

On its next possession, West Point needed one more play to score. This time, Dantariyus Cannon scored in a 59-yard sweep that helped seal the deal.

The Green Wave continued to pound in the second quarter. Jaylun Eggerson capped an eight-play series with a fourth-down, fullback dive at the 1-yard line. Cannon then scored on a 5-yard sweep.

West Point put the game out of reach with Harris' 7-yard touchdown in the final quarter.

Moments after the game, many West Point players slid through the mud in celebration. The burden of reaching the championship game was finally off their shoulders.

Though many outside observers predicted West Point wouldn't make it back to the MHSAA Class 5A State Championship, the team has defied the doubters. Even after losing the stars of last year's team, West Point has continued to play its brand of football.

"It's a common phrase in the West Point football program -- 'refuse to lose'," Chambless said. "They have always survived and advanced. This group has defied a lot of naysayers to get to this point. Even against Olive Branch earlier this season, we refused to lose. It seems this bunch is refusing to lose throughout this season.

"Not many guys out there thought we would get to this point, except our small circle. You just don't know how proud I am of this bunch."

Said Harris, "It feels good to get this opportunity at a three-peat. A lot of people said we wouldn't make it this far. We had to prove them wrong."