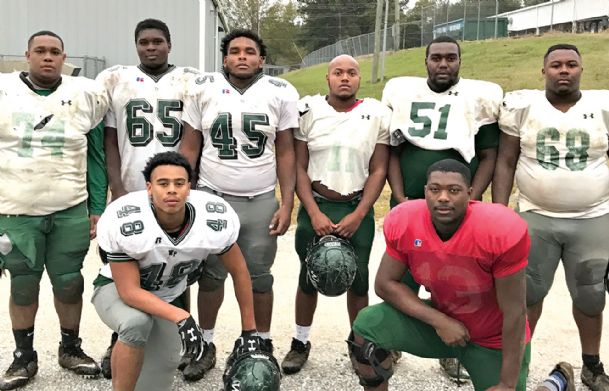 WEST POINT -- With his uniform clinging to his intimidating frame as a result of the rain Friday night, Kearis Smith wanted one more memory to savor from his final game at McCallister Field.

In celebration, Smith, a senior right tackle, and two of his teammates found a slick puddle on the sideline. On the count of three, they took off in a sprint and slid head first, skidding through the mud and the water. When the slide stopped, the stayed in the mud and belly-crawled another 5 yards, soaking in the squalor.

"We were just living and having fun with my brothers," Smith said about his post-game slide. "The slide and crawl got me hyped and got me moving forward toward the state championship."

Smith and the Green Wave had plenty to be excited about following a dominating performance.

Despite playing in less than ideal field conditions, West Point's offensive line created enormous space and made key blocks in en effort that saw the Green Wave carry the ball 54 times for 450 yards and five touchdowns in a victory in the Mississippi High School Activities Association (MHSAA) Class 5A North State title game.

For their accomplishments, the members of the West Point High offensive line share The Dispatch's Prep Player of the Week.

"We have an offensive line that can roll you off the football," West Point coach Chris Chambless said. "The guys on the offensive line come to battle every day and take a lot of pride in their craft."

Smith said the offensive line's ability to dominate starts every week in practice. Last week, the rain that soaked the fields made the challenge a little different.

"We pushed (the blocking) sled in the mud. We practiced in the mud," Smith said. "We like playing in the mud, and I know it was an advantage for us on Friday night."

In three postseason games, West Point has rushed for 1,145 yards. The offensive line has helped the Green Wave rush for 3,854 yards (2,709 yards during the regular season) in 14 games. The unit has contributed to six 200-plus yard games, two 300-plus yard games, and three 400-plus yard games. As a while, the offense is averaging 275 yards rushing per game.

West Point is known for its bruising running attack in an era of spread offenses and high-flying action. Though some might see the Green Wave's offense as 3 yards and a cloud of dust at times, the offensive line has proven the basics will take care of business. It all comes down to brotherhood and communication between the players.

"We are always talking and looking out for each other on the field," Smith said. "We are all leaders. We can follow each other because we have confidence in one another to make the right decisions."

West Point will make its 12th state championship appearance against West Jones (12-2). The Mustangs boast Alabama commit Byron Young at strong-side defensive tackle. Young, who is 6-foot-4 and 285 pounds, is a member of The Clarion-Ledger's Dandy Dozen, which is awarded in the preseason to the state's top players. Facing Young will be a fitting test for the offensive line to pass if it wants to help West Point earn the program's second three-peat and 10th championship. A win would help West Point join South Panola (11 titles) as the one schools to win 10 or more state titles in football.

"We just know he's the guy we're going to have block during the game," Smith said. "We're going to work hard in practice to prepare for any possibility."