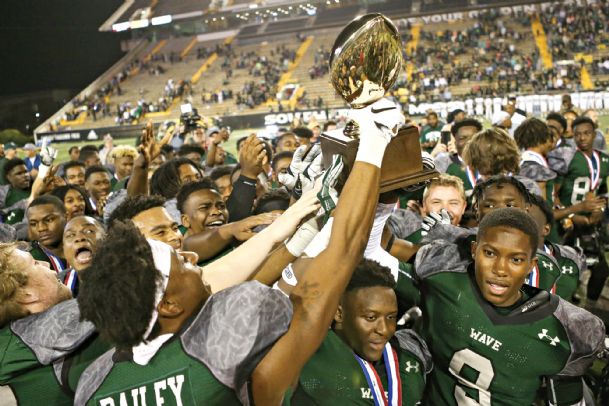 Late in the first quarter of the Mississippi High School Activities Association (MHSAA) Class 5A State Championship game, Melton -- one of the state's top defensive backs -- barely missed an interception when the football grazed off his fingertips.

"You could tell he was down after that play," Rupert said. "He wanted that interception. But man, he's a dog. You know what dogs do? They keep coming. There was no doubt he was going to make a big play to help us win. It was just a matter of time."

On that same series, Melton busted through and blocked a punt on the West Jones 45-yard line. The ball bounced wildly with Melton in hot pursuit. Finally, Melton caught up with the ball and rambled 25 yards for a touchdown.

"That changed the whole game," West Point junior running back Brandon Harris. "We weren't surprised. That is what he does."

Melton's play gave his team a two-score advantage. It proved critical as West Point went on to win its third-straight state championship with a 27-12 victory against West Jones before a crowd of 10,367 at M.M. Roberts Stadium.

West Point (14-1) won its 10th state title -- and 42nd game in its last 43 -- with a combination of suffocating defense, ball security (one turnover), and poised play on the state's biggest stage.

"It just feels great. They all do," West Point senior defensive lineman Jaylen Cungious said. "I got to admit, we wanted this three-peat badly. A lot of people counted us out before the season started, but we ended up with the gold ball. The coaches just expect excellence from us every day in practice, every day in games. We just kept working hard and believing."

Melton was a one-man wrecking crew. He also had an interception and five tackles.

The punt block happened through extra preparation in film study this week.

"We knew their formation," Melton said. "After watching film, I felt like I could get through there with just a little bit of an opening. After messing up the interception, that was big. The interception would have gone to the crib. I owed my team a big play after that."

A 2-yard run by Jaylun Eggerson capped a six-play, 80-yard drive to send the Green Wave to a 20-6 halftime lead.

"Our experience really helped to start the game," West Point coach Chris Chambless said. "West Jones has such an outstanding team. Their offense has kept most teams off balanced. We challenged our guys to start fast. We just had so many MVP-type performances. The punt block was a big turning point."

West Jones (12-3) hit a 61-yard pass on its first play of the second half. The kick failed, though, to keep the deficit at eight.

From there, it was on the West Point defense to continue to make big plays.

Brandon Lairy led the team with eight tackles. Lairy also had a critical pass breakup after a receiver had gotten separation in the third quarter. Cungious had seven tackles, while Tyron Orr had six. Brentt Cunningham had a critical fourth-down stop to protect the lead with West Jones driving.

Following the game, Melton took the state championship trophy and raced it from one end of the stadium to the other. A large West Point crowed roared its approval when the trophy passed by their vantage point.

"This was for everybody in West Point," Melton said. "We got another championship coming home, and it feels great."