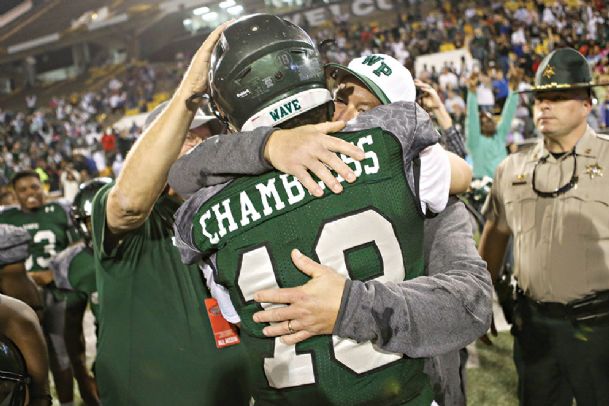 West Point High School running back Brandon Harris (2) tries to score a touchdown against West Jones in the first half of their Mississippi High School Activities Association (MHSAA) Class 5A State Championship Game on Saturday in Hattiesburg. West Point won 27-12.
Photo by: James Pugh/Special to The Dispatch

He knew there was talent. Fair or not, back-to-back Mississippi High School Activities Association (MHSAA) Class 5A State championships had created an expectation.

"We flew under the radar the entire season," West Point senior defensive back Ryan Melton said. "Hattiesburg, Olive Branch, Lafayette, a lot of others got talked about. We didn't. We really thrived on that."

Chambless knew he and his staff would coach more feverishly this year. A year ago, a veteran team could run on auto pilot some nights.

As the coaches worked and the players pushed, things started to come together. In the end, the Green Wave finished in the same position as their counterparts.

On Saturday night, West Point completed that run with a 27-12 victory against West Jones in the Class 5A State title game at Southern Mississippi's M.M. Roberts Stadium in Hattiesburg. The victory helped West Point (14-1) secure its third-straight championship.

For its accomplishment, the West Point football team is The Dispatch's Prep Player of the Week.

"You never take a state championship for granted," Chambless said. "It's a special season. You have to have talented players. They also have to have a work ethic. You have to have coaches that push them to a level they didn't even know they had. After that, you need some luck, some fortunate bounces. Everything has to go your way to have this kind of success."

The West Point senior class completed its three-year run with a 43-2 record. Both losses came were to Starkville in non-region play.

"Being able to three-peat is an incredible experience," West Point senior safety Tyler Rupert said. "As seniors, you always want to win a championship your last year. It was important that we weren't the class to see the streak come to an end."

In easily the most competitive of three state championship wins, West Point built a 14-3 lead late in the first quarter when Ryan Melton blocked a punt and returned it for a touchdown.

"That play got the whole sidelines excited," said West Point junior running back Brandon Harris, who earned most valuable player honors. "Once we got the lead there like that, we knew we could win the game."

West Point built a 20-6 halftime lead. In the second half, it was 20-12 when the Green Wave came up with a couple of big stops.

Harris then capped an 84-yard drive with a 5-yard run. Earlier in the game, he threw a 25-yard touchdown pass to Treddis Anderson on a direct snap.

"It was just an all-around team effort," Harris said. "The offense didn't have its best game. Fortunately, the defense had our backs. They got us some really big turnovers. They did that all year. It was a typical West Point defense. They were a big reason why we won the championship."

"All championship teams face adversity during the season," Melton said. "We had some close calls. Those games made us tougher as team. After we won at Olive Branch (by erasing a two-touchdown deficit late), we knew had the makeup of a championship team. All three championships have felt great. This is a good way to go out."