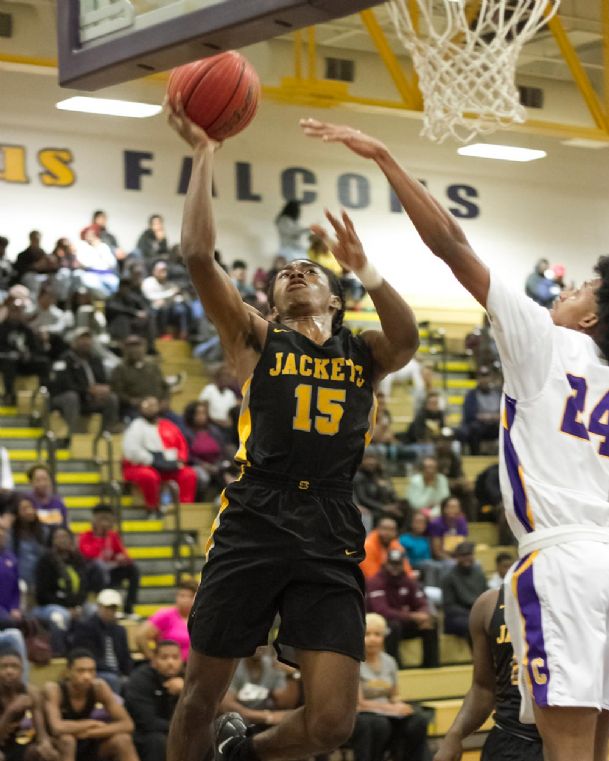 Starkvilleâs Jamarrion Brown (15) drives to the basket for a layup attempt. Photo by: David Miller/Special to The Dispatch

Atavius Jones knew what was coming.

With 15 seconds left and Starkville High nursing a three-point lead Saturday night at Columbus High, the forward defended a screen and came up with a steal and fast-break layup to push the Yellow Jackets' lead to five and an eventual 60-58 rivalry win.

The play capped a clutch late-game performance from Jones, who scored all six of his points in the final three minutes, including a pair on offensive rebounds he'd snagged. Jones also had a key block in the last minute of the game.

"I was feeling good," Jones said. "We've been under pressure all the time, and we practice it everyday."

Starkville improved to 8-0 ahead of a road game at Tupelo next Saturday.

The Jackets led by as many as 13 in the first quarter and carried a 12-point lead into the fourth. But Columbus, which would hit a season-high 12 3-pointers in the game, took a two-point, 50-48 lead late in the fourth after Blake Burnett and Tijah McCrary each had a pair of 3-pointers.

"We're not a great scoring team, so I told the guys to shoot it if they have a look," said Phillip Morris, Columbus coach. "They were feeling it tonight."

"We stayed home and played drive and had our big men play the goal if they came in for a layup," Townsel said. "It was really a lot of getting down there and guarding, sticking to what we usually do."

Townsel said Jones, who was instructed to crash the boards, was "big" down the stretch.

"That's why we put him in at the end," Townsel said. "We put in our best defenders and told them we need a stop for the game, and we got it."

Jamarrion Brown led the Jackets with 16 points, including three 3-pointers. Zeke Cook added 10, all of which came in the second half.

Morris attributed the late-game miscues to having a young team, despite the efforts of Burnett, a sophomore, who finished with a game-high 21 points on seven triples.

"Inexperience and lack of mental focus -- it's the story of our whole season," Morris said. "That last play was actually supposed to go the other way, but some of our guys just haven't been in those situations.

"We made some big shots, and we got some big defensive stops, but we got down the stretch and we turned the ball over three times in the last two minutes of the game. We just got to learn from it. We haven't been in a tight game, a tight situation like this. It was a good learning experience for us, especially me, being a first-year coach.

The Lady Falcons missed 13 at the stripe in the fourth quarter alone but leaned on its defense late with a key block and steal in the least minute, followed by Berniya Hardin's tie-up of Jalisa Outlaw to halt a game-tying shot opportunity.

It wasn't the Lady Falcons' best effort, but coach Yvonne Hairston will take it.

"We shoot free throws all the time, but they just weren't going in," Hairston said. "We just had a poor night shooting free throws, and it's unacceptable. But we figured out a way to win the ball game. They just kept believing, kept playing hard and made some key plays at the end of the game. That's a plus."

Columbus High forward Bri Smith got in early foul trouble, and her absence affected the Lady Falcons' hustle and ability to keep the Lady Yellow Jackets out of the lane, Hairston said. Columbus would trade the lead a handful of times in the fourth quarter before sealing the win late.

"Starkville didn't shoot the ball well, and we knew we had to stop penetration," Hairston said. "Most of their shots came from put-backs, and we just couldn't get a body on them, for some reason.

"We just didn't play very well tonight. Give credit to Starkville for stopping some things we usually do. Being No. 1 in the state right now, we've had a lot of stuff come at us, and we are going to get everyone's 'A' game. We just have to be on it."