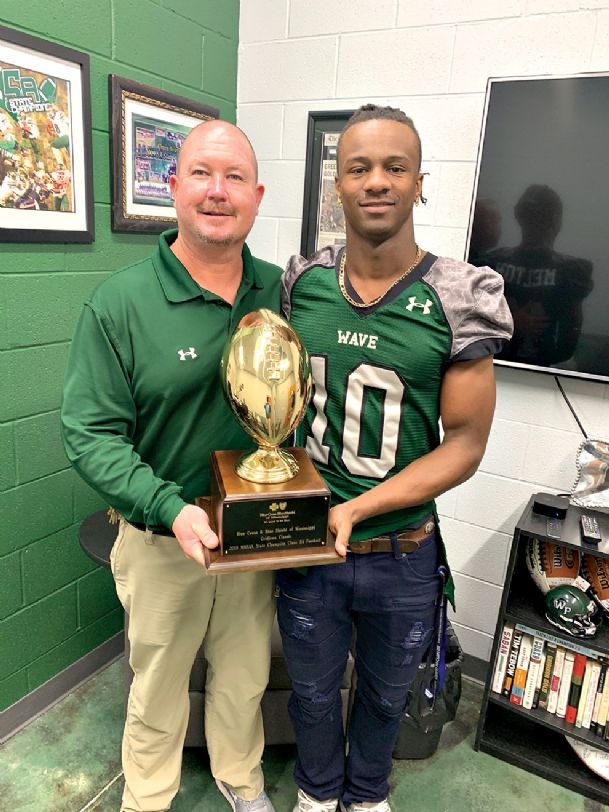 Ricky coached Ryan throughout his career, including a stint as an assistant coach on the West Point staff.

Still, there is one football-related task they rarely share together.

"We don't watch film together," Ryan Melton said. "He has always given me feedback on my performance. He is always pushing me to be better. However, we don't break the film down together. He has been around the game long enough to know what I am doing well with his own eyes.

"We talk on Saturday mornings. Sometimes, he wakes me up excited by a great play. Sometimes, it's the opposite."

The 6-foot-1, 173-pound defensive back played in the Bernard Blackwell All-Star Game. On Wednesday, he signed a National Letter of Intent to play at South Alabama.

For his success, Melton is being honored today as The Dispatch's Large Schools All-Area Football Team Defensive Player of the Year.

"On offense, it's common place to have that one dynamic playmaker on offense who can change the entire game," West Point coach Chris Chambless said. "It's rare to have that kind of presence on defense. Ryan gave us that this year. Whether it's playing his position on defense or blocking a big kick, he was everywhere on the field. On a defense that was really great, he was the leader. He kept the engine going. He could make things happen from anywhere on the field."

Perhaps there was no bigger play than the blocked punt Melton returned for a touchdown in a 27-12 victory against West Jones in the state championship game. He broke through the line untouched, blocked a kick and returned it 25 yards for a score that score gave West Point a 20-6 lead midway through the second quarter.

"He just makes plays," West Point senior linebacker Brentt Cunningham said. "With Ryan, there is nothing that stands out. Yet, he just imposes his will on the other team throughout the game. They know he is coming. They know where he is at, and he still controls most things on the field. As a defensive unit, we are told to go hard on every play. You never known which play might define a game or a season."

Going hard is something Melton heard from an early age from his father, who played linebacker at Vanderbilt. His father later had a lengthy coaching career alongside Chambless. That ended this season when a position change within the school district meant he had to give up coaching.

"There is a special bond there because my son (Jake) and Ryan were born at the same time," Chambless said, "so the families have always been close. From an early age, Jake and Ryan were running around the field house together. In a lot of ways, I feel like I have helped raise Ryan. He is just part of the family. He got the football instincts naturally because his dad was one heck of a player. He instilled the work ethic in Ryan and made sure he was always on top of everything."

West Point finished 14-1 this season. The Green Wave had fewer marquee players, but they found a way to bounce back from an early season loss to Starkville to win a third-straight state title. The road to the title was bumpy. West Point had a come-from-behind win at Olive Branch and also beat region rival Lafayette by a point.

"This team had a toughness," Melton said. "As seniors, it was important we go out as champions. When you have two-straight titles, you want that third one. I promise you the coaches are going to drive next year's team. They are going to do everything they can to win again."

As West Point rose to the top, many Green Wave players continued to fly under the radar. As Melton's film collection accumulated, more schools became interested. The decision to sign early ensures Melton will follow in his father's footsteps and have a chance to play Division I ball.

"It's something we have talked about from time to time," Melton said. "The coaches have always stressed to us that you will get out of football what you put into it. I saw the impact the game on other members of my family. I wanted to have that feeling, too."