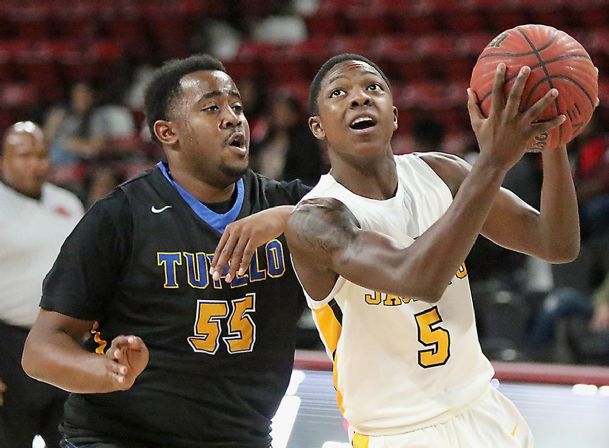 Starkville High School won a pair of games Wednesday at the Travis Outlaw Slam Dunk at the Hump tournament being played at Humphrey Coliseum. The Starkville boys beat Tupelo, 69-45, while the Starkville girls routed Noxubee County, 74-16. In the photo, Starkville Highâs Forte Prater (5) drives past Tupeloâs Elijah Traylor (55). Photo by: Jim Lytle/Special to The Dispatch

STARKVILLE -- Starkville High School boys' basketball coach Greg Carter does not feel like this is one of his better 3-point shooting teams.

Senior guard Terry Tate stated his own objection to that claim Wednesday afternoon.

"We have a chance to be a pretty good offensive team by the end of the season," Tate said. "Right now, it's just finding the hot hand. We try to get somebody going. This game it just happened to me. The ball felt good leaving my hands. This was a huge win for the team. Hopefully, we can build."

Starkville has spent most of the season top-ranked in a handful of basketball rankings. The undefeated start to the season saw its first down turn on Dec. 15 when Tupelo handed Starkville a 57-55 overtime setback in the Tupelo-hosted All-American Shootout.

"That made us want this game badly," Starkville senior Atavius Jones said. "They got us the last time around, so we had to play better. It starts on the defensive end with this team. We guarded much better."

Carter has built an annual state championship-contender program based on a sturdy defense. While this bunch of Yellow Jackets do lack that dominate scorer, they make up for it with defensive effort and depth, as many as four bench players are expected to give the team quality minutes on a nightly basis.

"Our biggest strength is depth," Carter said. "This year, we have been blessed with a lot of interchangeable parts. We are still searching for the right combination. We are trying to find who plays best together. We have to play a little more pressure defense this year. Fortunately, we have the depth, so we can substitute more frequently. That helps us offset some of our offensive liabilities."

Jones made a big impact as a rebounder and shot blocker, after coming over from the football team. Again this season, the Starkville football team had a deep postseason run. By his own admission, Jones said these games played during the holidays are huge for his own growth as he rounds into basketball shape.

"Currently, we are just looking for an offensive identity," Jones said. "In the past, you could identify the scorers on our team. As we keep playing more games together, we are looking to identify those players that can lead us."

Starkville got a huge lift from Jones off the bench, as well as Jamarvis Phillips, who has seen his minutes grow significantly in recent weeks.

"(Phillips) is playing really well for us right now," Carter. "I like how he rebounds. He is always going after the loose ball, with lots of effort."

Tate finished with a game-high 12 points on a 4 of 6 night from 3-point range. He hit a pair of 3-pointers to help spark a 14-0 run. That run ended the first quarter, started the second quarter and sent the Yellow Jackets to a 24-10 lead.

Starkville (11-1) would hold a 33-20 halftime lead and led comfortably throughout the second half.

"Just a big win for our team," Tate said. "When we play our best defensive game, we will be hard-pressed to beat. We just have to get a couple of guys going on offense and play some great defense. If we do that, we have a shot most nights."

"We have to have that kind of balance," Carter said. "This is a much different team than we have been having around here. Those are the kinds of offensive numbers we have to have."

In another tournament game played Wednesday, the Starkville girls tuned up for today's huge showdown with Olive Branch by routing Noxubee County, 74-16.

"This was a great opportunity to get a lot of players some playing time," Starkville coach Kristie Williams said. "We will carry some momentum into the game with Olive Branch."

The Lady Jackets led 35-4 after one quarter of play.