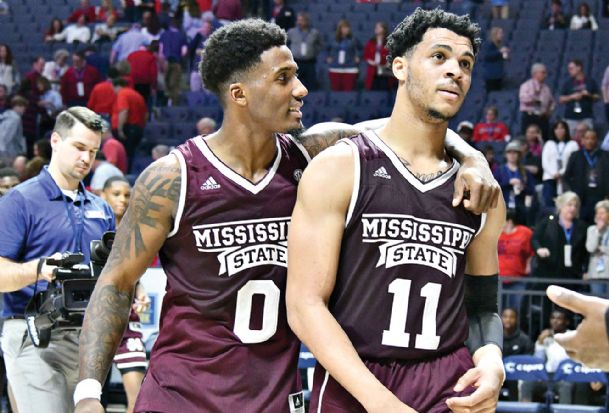 Ole Missâ Blake Hinson (0) battles for a rebound with Mississippi Stateâs Reggie Perry (1) in the second half of their game Saturday at The Pavilion at Ole Miss.
Photo by: USA TODAY Sports

Mississippi State men's basketball coach Ben Howland and Perry's teammates have been waiting patiently for that to happen.

Perry scored a career-high 21 points and had 11 rebounds to help No. 22 MSU beat Ole Miss 81-75 in Southeastern Conference game at The Pavilion at Ole Miss.

"He just has a lot of confidence," MSU senior guard Quinndary Weatherspoon said. "I trust in him to do anything on a basketball court. We know the type of player he is becoming. He can get those numbers any night."

Mired in its most difficult stretch of the season, the Bulldogs grabbed their first conference road win to move to 16-5 and 4-4 in the league. Losers of five of six, Ole Miss fell to 14-7 and 4-4.

Howland credited Perry with the game's two biggest shots. The first was a 3-pointer that gave MSU its first lead of the second half (62-60 with 9 minutes, 34 seconds left) and another 3-pointer that gave the Bulldogs the lead for good (76-73 with 3:32 left).

"Just big shot after big shot. He and Q both were doing that," Howland said.

Ole Miss was a step quicker last month in an 81-77 victory in Starkville. The roles were reversed Saturday.

"We had to call a couple of timeouts early there to coach effort," Ole Miss coach Kermit Davis said. "I don't like that. That is not what this team has been doing this season. If you can't be motivated to play your rival in a sold-out arena, that's your problem. Just didn't think we had the toughness we needed to win today. The 50-50 balls, the toughness plays, they all went to State."

Howland said "an aggressive defense" was the plan and it worked early, as the Bulldogs scored seven-straight points to build a 15-8 lead.

"The early stretch there to start the game set the tone," Howland said.

"Coach had really been on us in practice about our defensive toughness," Perry said. "We showed our ability to rebound and defend today."

With the Bulldogs defending and rebounding, the offensive pressure fell to Perry and Quinndary Weatherspoon.

In his final regular-season game against MSU's biggest rival, Quinndary Weatherspoon matched a season-high with 27 points, giving him a career average of 16.5 points per game against Ole Miss.

In a loss to Alabama on Tuesday, MSU couldn't quite get over the hump. This time, the Bulldogs cleared that hurdle and had some type of control of the game for the final 10 minutes.

Trailing 48-41, the Bulldogs quieted the crowd with six-straight points. Still, the lead wasn't secured until Perry drained a 22-foot 3-pointer from the corner for the 62-60 lead.

Perry has 39 points in two road games this week. His double-double was his second in three games, and third overall.

When Howland was asked if these type of scoring numbers could be commonplace, he quickly flipped the switch to the rebound category.

Perry had seven of his 11 rebounds on offensive glass.

"You could say we are hopeful (for the points), but not expecting," Howland said. "He is a freshman playing in the best league in America. That being said, if he plays 34 minutes like he did tonight, he is going to get double figures in rebounds. He is just a natural at that."

The Bulldogs enjoyed a 9-0 run to build a 66-60 lead. Breein Tyree's 25-point night included a critical 3-pointer to stop that run.

Breein delivered his final dagger to tie the game at 73 with 3:53 left.

Unfazed, Perry answered with the go-ahead 3-pointer with 21 seconds left.

"He's the next go-to big-shot guy on our campus," Quinndary Weatherspoon said. "I saw it coming."

Davis had 15 points, while Devontae Shuler had 14 points for the Rebels.

The Bulldogs were plus-12 on the boards.

"They came into our place and wanted it more than we did," Davis said. "That's disappointing."