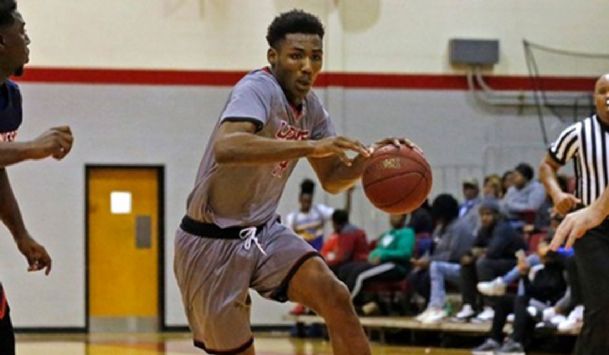 Powers was determined not to let that happen again.

"We were not very good on defense that night," Powers said. "You could use whatever words to describe a team that didn't guard anybody. It was a tough night. Our goal tonight was to come out with a different mind-set. We wanted them to feel us on the defensive end."

The game plan was narrow in focus. The results were resounding, as EMCC moved into a first-place tie atop the Mississippi Association of Community and Junior Colleges (MACJC) North Division standings with a 70-59 victory before a large, rowdy crowd Monday night at Currie Coliseum.

Leading 33-27 at halftime, EMCC (12-7, 6-2 North) was dominant in the next 15 minutes. The Lions held the Bulldogs without a field goal for close to seven minutes to start the second half.

Powers was everywhere, too, grabbing critical rebounds, collecting assists, and forcing some turnovers in the passing lane.

"That stretch to start the second half was as well as we can play," EMCC sophomore guard Terryonte Thomas said. "When we start clicking and this place starts rocking, that's a good thing. The bond on this team is really strong. We feed off each other so well. A lot of us have been together for two years. It's special out there on the court."

Thomas rammed home a 24-foot 3-pointer from the top of the key for a 40-29 lead. By the time Jones hit both of his, the Lions led 52-31. The surge came after EMCC had one field goal in the first eight minutes. The Lions also lost sophomore forward Malik Harper at the 12-minute, 15-second mark of the first half when officials stopped play and ruled he had thrown a punch during a scuffle under the basket.

Shortly after the ejection, Holmes C.C.'s Czar Perry hit a 3-pointer to give the Bulldogs a 14-10 lead. Perry had 37 points in Holmes C.C.'s 75-74 victory on Jan. 10 in Goodman. He scored his team's final six points Monday night and finished with 12.

"We just let one guy get loose and totally beat us by himself," EMCC coach Billy Begley said. "Wasn't totally sure how this game might go, but we were going to try to control him. He got some points tonight, but the game was over with then."

"It's just always next man up," Begley said. "After the ejection, it's like who can go in next and help us make plays. We struggled in the second half with the press. This is the first time all year we have seen a team press us this much in a game. That experience will help us. We made mistakes that a team full of sophomores shouldn't make.

"However, the first 15 or so minutes of the second half were really good. Our defensive effort was where it needs to be."

The top four teams from the North Division will advance to the eight-team state tournament at Jones College.

Powers, Agnew, and Bell played at Starkville High School together, which helps explain the Lions' bond.

"Everybody is excited about what we can do here to end the season," Powers said. "Coach told me it's been (19 games), so nobody is a freshman anymore. We go about 10 deep. Our job is to come in off the bench and provide some energy. (Begley) wouldn't play us if we weren't being counted on to help the team win."

EMCC is tied for second with Northeast Mississippi C.C. in the division race.