MSU men face No. 19 LSU to kick off key stretch 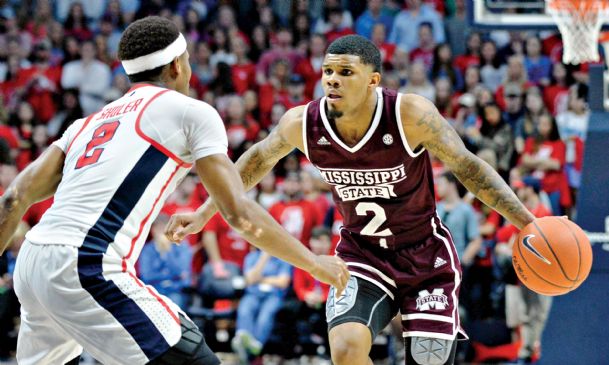 Mississippi State guard Lamar Peters (2) handles the ball against Ole Miss guard Devontae Shuler (2) during the first half at The Pavilion at Ole Miss. Photo by: USA TODAY Sports

He also understands the magnitude of his team's 81-75 victory against Ole Miss on Saturday in Oxford and how it has helped make this week even bigger.

"It's a difficult stretch," Howland said. "Winning games in this league is so hard. You don't have to celebrate one because the next opponent is always going to be great.

"I've been watching film on LSU. They're just really, really talented. They're very well coached and very impressive. They are a great rebounding team and outstanding in transition. They create a lot of offense from their defense. They really have good guard play and good bigs. It's just a combination of everything."

MSU earned its first conference road win Saturday in Oxford. The Bulldogs pulled out the nip-and-tuck affair late thanks in large part to a 21-point, 11-rebound performance by Reggie Perry, who was named SEC Freshman of the Week.

"We talk about it all the time in the room." Woodard II said. "We understand there are high expectations for both of us. We understand we have to clear our minds, play together and (play as) one when we're out there."

Howland wouldn't share his plans for his team's starting lineup. Tyson Carter and Perry started Saturday in place of Nick Weatherspoon and Aric Holman. Weatherspoon injured his knee against Alabama, but he played 26 minutes against Ole Miss. Howland said Saturday that Holman was given a chance to come off the bench because "he had been pressing too hard."

On Tuesday, Howland said Weatherspoon was coming off his best practice of the season Monday and wasn't showing any lingering effects of being back in action. He also said Lamar Peters was still receiving treatment for a sprained wrist that limited him Saturday.

Howland is thankful for the rare Wednesday game.