Starkville High School sends group of 14 to next level 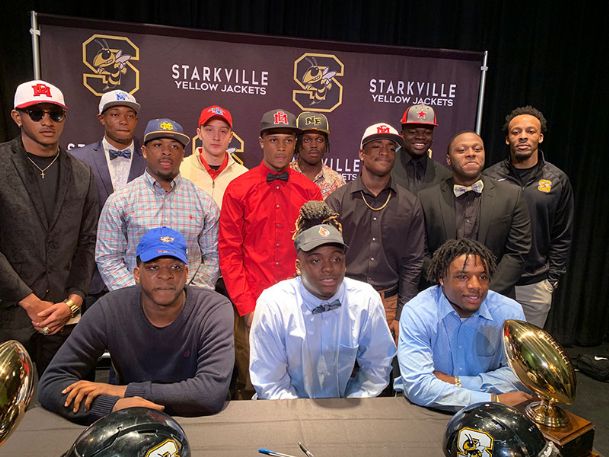 A talented senior class saw 14 player sign scholarship offers for the next level on National Signing Day at the Starkville High School Auditorium.

"Every coach wants to win the championship, however, the mark of a good program is how many kids you put on the next level," Jones said. "At the end of the day, it's important to use football to get your education. These players, most of them, have played since they were 6- or 7-years-old. Today is the day all of that hard work pays off. Football is a way out for many of them. It provides them a chance to get a college education, that otherwise might not be possible.

"To see this room fill up with parents, friends, other family members and of course teammates. Well that makes you feel very good as a coach."

After playing for the Mississippi High School Activities Association (MHSAA) Class 6A state championship in 2017, Starkville saw a promising season end in the second round of this past season's playoffs.

"For me personally, I was a late-bloomer," Jones said. "Then I got to play some college ball and in the NFL. That's why having this opportunity is so important. These guys are ready for the next level. They have been well-prepared both in the classroom and on the field. Some kids peak early. Some kids peak later. As coaches, it's our job to push these guys to see their capabilities. When you first start playing high school ball, this is the day that you have been anticipating."

The biggest suspense on this campus was the future home of linebacker/defensive end Zach Edwards. With caps from Ole Miss and Tulane on the desk, Edwards reached below to unveil a visor from the University of Louisville.

"The recruitment process was fun but I am glad it's over," Edwards said. "Louisville has been consistent in their recruitment of me. Even after the coaching staff change (Scott Satterfield was named head coach on Dec. 4), the coaches stayed in constant contact. Playing for a new coaching staff is the one of the things that intrigued me about going to Louisville.

A two-time all-state selection, Edwards was ranked a three-star prospect by both 247 Sports and Rivals. He was considered the No. 31 inside linebacker nationally and the No. 18 player in the state. A participant in the Mississippi-Alabama Shrine Classic, Edwards chose Louisville over offers from Texas A&M, Ole Miss, Mississippi State, LSU, Southern Mississippi, Marshall and Memphis, according to the University of Louisville web site.

"It will be a chance to go in and compete in a major conference," Edwards said. "I learned a lot from some of the former players like (Mississippi State's) Willie (Gay). Everything he told me was true. It was going to be a long, drawn-out process and it would always be hectic. Still, it was fun and I am glad I got to go through it."

Running back Rodrigues Clark and lineman Jalil Clemons participated in the ceremony after having signed with the University of Memphis in December.

The Mississippi Association of Community and Junior Colleges (MACJC) inherited a nice crop of Yellow Jackets with nine joining the league.

Also on campus Wednesday, former SHS lineman Jakoby Jones, who was a member of the EMCC national championship squads in 2017 and 2018, came back home to sign with the University of Alabama at Birmingham.