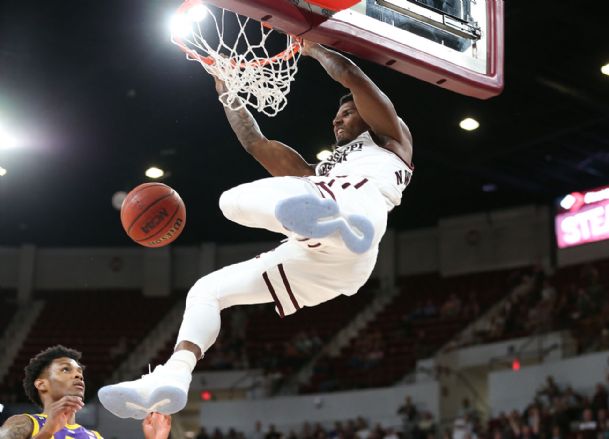 STARKVILLE -- On a night full of big shots, LSU's Naz Reid made the biggest.

With the shot clock expiring, Reid delivered the final dagger with a top-of-the-key 3-pointer as No. 21 LSU beat Mississippi State 92-88 in overtime in a Southeastern Conference men's basketball game played Wednesday night before a crowd of 7,456 at Humphrey Coliseum.

The Bulldogs bolstered their NCAA tournament resume with a road win at Ole Miss Saturday. Now back home, Wednesday opened a critical three-game homestand for the Bulldogs, as they look to climb into the top four in the conference standings.

Instead, the homeswing started with another heart-breaking last-second defeat. The Bulldogs (16-6, 4-5) have lost four conference games by a combined 17 points, with two being in overtime.

"That was a gut-wrenching loss against a very good team," MSU coach Ben Howland said. "Give them credit, the way they battled back. We had leads multiple times in the first and second half. Naz Reid was fantastic. He had a phenomenal second half, and they did a really good job of getting him the ball."

LSU (18-4, 8-1) maintained a second-place tie in the conference standings with MSU's Saturday opponent, No. 5 Kentucky. The Tigers have won five times in conference road games.

Reid had 25 second-half points as the Tigers rallied from a 10-point deficit in the final 15:39 of the second half.

"Only having four turnovers in the second half really helped us," LSU coach Will Wade said. "Obviously, a very good win for us. Mississippi State is a tremendous team. I thought we were going to come out and play well. It's tough when you play a team like Mississippi State. We could play our best game and still get beat. It makes it tough, but we were able to scratch it out tonight."

The offensive stars were plenty on this night.

For MSU, Quinndary Weatherspoon had 27 points, while Reggie Perry recorded his fourth double-double (third in conference play) with 19 points and 10 rebounds. A surprise starter in the win over Ole Miss, Perry again delivered in the starting role. Perry has scored 18 or more in the Bulldogs' last three games.

The only down spot for the reigning SEC Freshman of the Week was at the free throw line where he was 9-of-16.

"Obviously, (a thing needed to be done differently) was my free throws," Perry said. "If I made those, I feel like we could have definitely won the game."

After a sluggish first eight minutes, the Bulldogs responded with a 17-0 run for a 25-16 lead.

"Our defense was great," Quinndary Weatherspoon said. "The defensive's intensity getting them hyped up and making them turn the ball over. We were able to get out in transition."

LSU had the answer in the form of point guard Tremont Waters. Emerging as a candidate for conference player of the year honors, Waters had 11 first-half points.

The Tigers cut down on the turnovers and actually crawled back within three. The Bulldogs scored the final five of the half with a trey from Weatherspoon giving the Bulldogs a 42-34 halftime lead.

"LSU is a very good team," Howland said. "Some of (not protecting the lead) definitely is the minutes. We took some shots at times especially when we had an eight- and nine-point lead where we want to maybe manage them little better and not be in such a rush."

The Bulldogs still held some type of lead for the first 17 minutes of the second half.

Reid and Waters (26 total points) eventually closed the gap with the teams being tied at 78 with 3:12 left.

Down one with 56 seconds left in regulation, Perry grabbed a critical defensive rebound. From there, Quinndary Weatherspoon drove to the basket and drew a foul. He hit one of two free throws for the final tie of regulation with 37 seconds left.

The Bulldogs then got a stop but Lamar Peters missed a rushed 10-footer as time expired.

Overtime was fought on virtually even terms until the back-breaker from Reid.

"We simply have to find a way to close out these games," Quinndary Weatherspoon said. "That means better defense for longer stretches of time."