Challenges continue for MSU men's basketball as No. 5 Kentucky comes to town 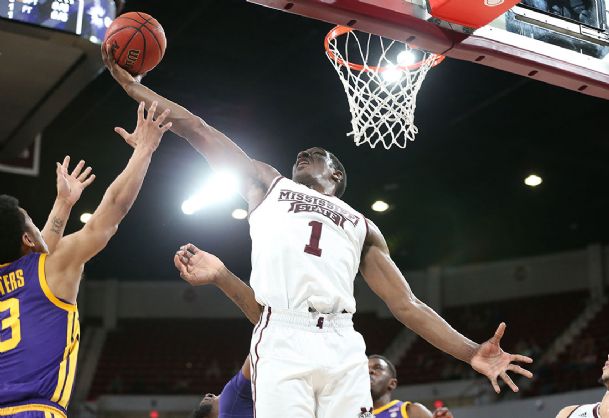 The Bulldogs are now in that stretch, trying to enhance their Southeastern Confernce standing, earn back a national ranking and strengthen an NCAA tournament resume.

"Kentucky is always good," Howland said. "It is one of those contests where you find out so much about your team. You have to play great to have a chance."

A strong non-conference schedule gave the Bulldogs a legitimate chance to return to the NCAA tournament long before conference play started.

While an 0-2 start to league play caused some concern, the Bulldogs have gained some momentum, by winning four of their last seven games.

"The thing about this team is we have to keep getting better," MSU freshman Robert Woodard II said. "We have some big goals to achieve."

A slow start to conference play put the Bulldogs behind the 8-ball a year ago. Again this season, the stronger part of the conference schedule took place in the middle third of the schedule.

Last week, Howland called the current schedule "the murderer's row" a week ago. After falling to Alabama in the final seconds, MSU righted the ship with an 81-75 win over Ole Miss in Oxford.

That set the tone for this critical three-game homestand. After losing to LSU 92-88 in overtime Wednesday, the homestand concludes with Alabama (14-8, 5-4) at 8 p.m. Tuesday.

The Ole Miss victory also gave berth to a new starting lineup. Freshman Reggie Perry drew the start and again started in the loss to LSU.

Perry has collected a double-double in three of the last four games. He has scored 18 or more points in three straight games.

"The thing about Reggie is the rebound number," Howland said. "He is a natural at rebonding. The more minutes he plays, the better our numbers will be in that category. The offense will come, too, but the rebounds really excite me."

Quinndary Weatherspoon is also on his own offensive roll. Weatherspoon has matched a season high with 27 points three times in the Bulldogs' last four games.

Weatherspoon is now second in the league with an average of 18.0 points per game.

Kentucky will be looking for its 13th straight victory in the series.

Earlier in the year, Kentucky took a 76-55 win at home. The Wildcats have won nine straight after losing their conference opener in the final seconds at Alabama.

The Bulldogs' other four conference losses have been by a combined 17 points.

"We just have to find a way to win these close games," Weatherspoon said. "We have been close, but we have to do more."