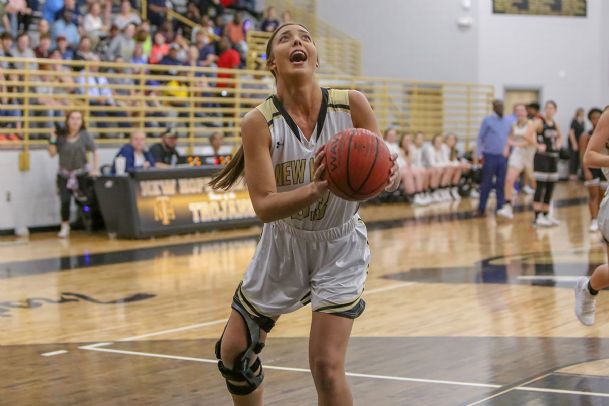 In her final game at New Hope High School, senior Julia Franks scored her teamâs final points of the game. Franks tore her ACL during a game in December. She took part in Senior Night ceremonies and took the court in the closing seconds to score for one final time. Photo by: Chris McDill/Special to The Dispatch

The final basket of New Hope High School senior Julia Franks' career was not a game-winner.

However, it had to feel like it meant a championship.

Franks tore her ACL on Dec. 28 in a game at the New Hope Trojan Classic. With her leg in a brace, she joined her teammates for Senior Night festivities Thursday night at the school.

In the closing seconds, Franks checked in. The Lady Trojans collected a rebound and threw it to the opposite end of the floor. The ball was saved in bounds and relayed to Franks.

She hit a layup and Trojan Gym erupted with applause.

It was the final score in New Hope's 53-46 win over Lowndes County rival Caledonia.

"That was special," New Hope coach Chad Brown. "Special thanks to (Caledonia) coach (Gary) Griffin, who helped make that happen. She means so much to our team. To be able to get her on the court one last was special. It will always mean a lot to her. She is the heart and soul of our team. That was great."

New Hope (11-14) has already qualified for the Mississippi High School Activities Association (MHSAA) Class 4A playofffs. The Lady Trojans are the region's third seed and will face tournament host Leake Central at 7 p.m. Thursday in the regional tournament semifinal round.

Franks was accounting for close to half of the team's offense when she went down in the contest against Jackson Academy.

"It was a big blow to our team," Brown said. "We had to adjust some goals after that. Our No. 1 goal to start the season was to make the playoffs. To be able to achieve that is important. We are young a team. It's been hard to replace both the scoring and the leadership (from Franks). We have done the best we could this year. Proud of how we have played and improved."

Both teams struggled offensively in the first quarter. In the second quarter, the Lady Trojans took charge. A 10-0 run gave New Hope a 20-10 lead.

The Lady Trojans allowed five second-quarter points to take a 25-13 lead at halftime.

In the second half, New Hope would run the lead to 15 but Caledonia kept battling. A 3-pointer by Allison Pennington brought the Lady Feds back within three at 47-44.

Caledonia had a couple of chances to tie but could not covert.

"Gave a great effort," Caledonia coach Gary Griffin said. "This team is young. They have played hard throughout the season. Looking forward to watching their growth and maturity during the off-season."

Caledonia (3-18) will be the No. 6 seed in the Class 4A, Region 2 tournament. It will face Shannon at 4 p.m. Tuesday at Itawamba Community College.

For New Hope, Brown has a chance to get the team some postseason experience before the actual Class 4A playoffs begin.

"Leake Central has a talented team," Brown said. "It's a game we can win. We just have to play well. Making the playoffs was the primary goal. Being able to make it to the region championship game would be extra."

For Caledonia, Nenah Young had 14 points, while Pennington had nine points.