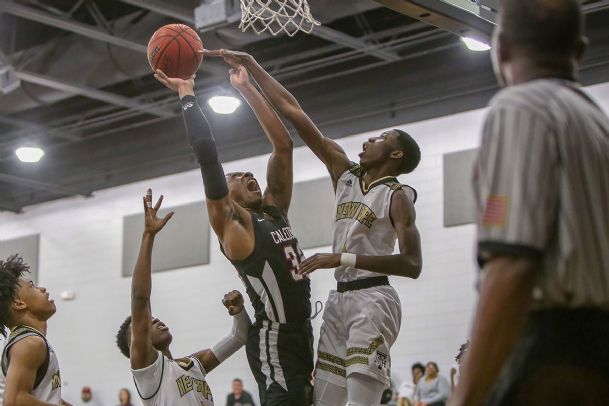 Caledonia High School boys' basketball coach Gary Griffin wanted his team to drive to the basket and to get to the free throw line Thursday night.

The Confederates kept their coach happy all night long.

Caledonia hit 30 of 43 free throws and needed almost all of them to hold off New Hope 71-65 in an intense Lowndes County rivalry battle at the new New Hope Gym.

Caledonia also won the first meeting (66-54 at home on Dec. 4) meaning a season sweep for the first time in two decades.

"It feels great to do something that hasn't been done here in a long, long time," Caledonia senior Tyrin Smith said. "When I transferred (from Columbus High School), my goal was to be part of moments like this. The seniors wanted to show that this isn't your normal Caledonia team. We are a lot better in a lot of areas. It's fun to be part of this."

Caledonia (21-6) will be the No. 3 seed in the Mississippi High School Activities Association (MHSAA) Class 4A, Region 2 tournament. It will face Amory at 5:30 p.m. Tuesday in a first-round game at Itawamba Community College.

"Proud of the regular season," Griffin said. "Our administration does everything possible to make sure we have what we need to have a successful program. These kids are a good representation of the community. We are young in a lot of areas. The handful of seniors we have, well they have led. They have gotten everything out of this team possible. This game showed a little bit of the way we need to play to win."

Senior Romeo Sanders led Caledonia with 37 points. He was 21 of 23 from the foul line. Ironically, Caledonia got the offensive rebound on both misses.

"From the first time we played them, we felt like we could have some success in the lane," Sanders said. "Both of these teams are physical teams. There were calling it tight early, so that just meant for us to do what we do, to get to the basket and make free throws. Proud of this team and how we kept our composure."

New Hope (15-12) will be the No. 2 seed in the MHSAA Class 4A, Region 4 tournament. It will face Louisville at 8:30 p.m. Thursday at Leake Central. Since this is a five-team region, the Trojans have already clinched a return trip to the Class 4A playoffs.

"Played hard and competed," New Hope coach Drew McBrayer said. "Put them on the free throw line too much. Proud of how hard we played and how we had a chance there at the end. This team has come a long way from the start of the season."

A nip-and-tuck first half saw Caledonia carry a 29-27 lead into the intermission.

In the third quarter, the Confederates opened things up with a 7-0 run. Cooper McCleskey hit a pair of baskets during that run. Another 3-point basket by McCleskey ran the lead to 41-34.

The Confederates later scored six points over two possessions, thanks to a technical foul on the Trojans' bench. A putback by Johnson ran the lead to 47-35.

"Before we took the court, we talked about it being a game of runs," Griffin said. "New Hope was playing at home and they always have a great crowd. We knew they would make runs at us. Our job was to answer when they had a run. We just couldn't let him consecutive baskets and get things going. We did a great job the entire night of answering runs."

LJ Hackman and RL Mattix each hit critical 3-point baskets in the early stages of the fourth quarter.

Mattix later hit a pair of free throws to bring his team back within 56-51. However, when Caledonia came up empty with no points on a two-free throw possession, the Trojans had a turnover after a Caleb Parr defensive rebound.

A putback by Parr later closed the gap to 62-58. However, Sanders proved too much at the line, hitting 5 of 6 in the final 75 seconds.

"This was another chance for this team to grow up," Sanders said. "This late in the year, the younger guys are playing like veterans."

For New Hope, Mattix had 18 points for a second straight game, while Parr had 14 points.

For Caledonia, Sanders was followed by McCleskey with 13 points and Smith with 12 points.