MSU men drop another heart-breaker, this time to No. 5 Kentucky 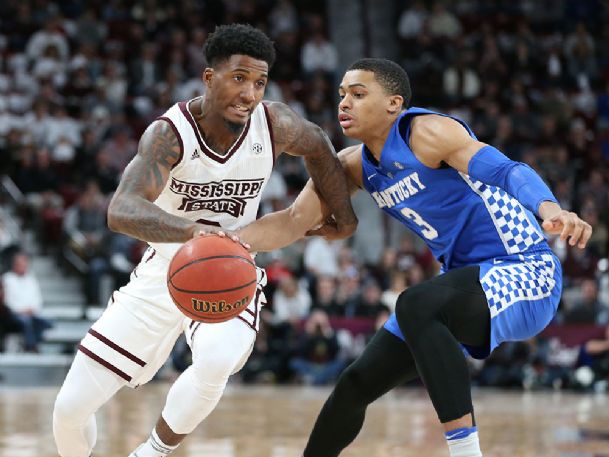 STARKVILLE -- The Mississippi State men's basketball team quest to learn how to win a close basketball game at home will extend another week.

Down by 18 early in the second half, a furious rally was not enough to give the Bulldogs a signature victory Saturday afternoon.

No. 5 Kentucky did enough to hold off MSU 71-67 in a Southeastern Conference contest played before a national television audience and a crowd of 9,019 at Humphrey Coliseum.

MSU (16-7, 4-6) lost both home games to nationally-ranked teams by four points each time this week. No. 21 LSU took a 92-88 overtime win in Starkville Wednesday.

"For us today, it's not digging a hole in the first half," MSU head coach Ben Howland said. "If you go into halftime with 20 minutes left in the game, down fifteen against a really good team -- maybe the hottest team in the country is Kentucky right now -- that puts a very low (win) probability."

In the opening half, Kentucky (20-3, 9-1) shot 53.3 percent from the field and only committed three turnovers.

"Mississippi State is an NCAA tournament team," Kentucky coach John Calipari said. "Their guard play is outstanding. The first half is where we really won the game. At halftime, we told the guys they would make two runs. (MSU) had to be hurting after the LSU game, so we knew they would be coming after us."

Calipari proved correct. After his team won 76-55 in the team's first meeting, the rematch was decided in the final seconds. The Wildcats did withstand both runs.

"Making our runs, we knew coming out down by 15 we had to do something," MSU guard Robert Woodard II said. "We had to make some kind of change. We had to start on defense before we could make those runs. That was our main key for making the run."

Howland has said repeatedly his team's defense can lead to better offensive production. Wednesday night against LSU, the Bulldogs had precious few consecutive stops after a 17-0 run midway through the first half.

Against Kentucky, the Bulldogs did find their defensive identity.

"We had a shoot around at 7:30 a.m. (Saturday) morning," Calipari said. "We never do that. However, we knew how important this game was. I think we got a little tired there at the end. We were trying to hang on."

Down 11, the Bulldogs ripped off 10 straight to energize the crowd and to pull back within 51-50 with 8:41 left. Tyson Carter had a big hand in that run, while Nick Weatherspoon and Woodard II were providing a spark on the defensive end.

Reggie Perry drew a third straight start but was hampered by foul issues, including a critical double-technical call between he and Washington.

Still, the Bulldogs kept battling and had chances.

Kentucky scored six straight for a 57-50 lead. The Wildcats had missed 14 of their first 18 shots for the half.

The Bulldogs fought back with Lamar Peters finding success from long range and Quinndary Weatherspoon awakening from a modest first half.

"We messed up on the defensive end when we switched," Kentucky guard Ashton Hagans said. "They took their chance to go at it. (Peters) and (Quinndary Weatherspoon) both took down some big-time shots."

The Bulldogs fell back down 10 but Peters then pulled the team back within 65-61 on a long-distance 3-pointer.

Herro answered with what Howland called a "back-breaking 3-pointer" as the shotclock expired on the other end.

The Bulldogs had one last shot down three but Quinndary Weatherspoon drove to the basket, achieved slight contact but lost possession with 10 seconds left.

"Once we turned defense up, that's when we are better offensively," Nick Weatherspoon said. "Once we got going defensively, we started getting points in transition. We had them on their heels. We just couldn't convert at the end. Our defense turned into offense, that's what made us get back into the game."

Peters had 16 points and Quinndary Weatherspoon had 14 points for the Bulldogs.

Washington led the Wildcats with 23 points.

Six of MSU's seven losses have been five points or less.

The next attempt to reverse that trend will be at 8 p.m. Tuesday when Alabama comes to town to finish a three-game homestand for the Bulldogs.