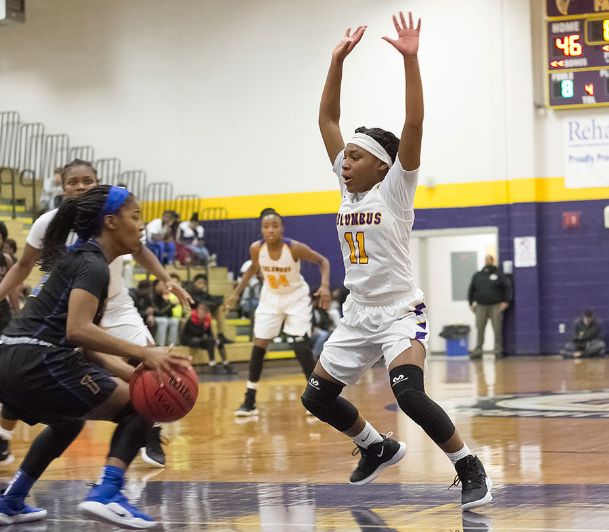 Jabria Snell (11) and the rest of the Columbus Lady Falcons begin region tournament play Tuesday. Photo by: David Miller/Special to The Dispatch

In the Mississippi Association of Independent Schools (MAIS), North State championships are on the table this week in three different classifications.

"Our primary goal this year was to make the playoffs," New Hope girls' coach Chad Brown said. "Since we have achieved that goal, our plan is to use the region tournament for some momentum."

In some of the smaller classifications, some teams have indeed clinched. However, the season will be on the line for dozens of others when they play opening-round contests.

The New Hope boys (15-12) have also clinched a spot in the playoffs, after advancing to Jackson a year ago.

Wins by either squad Thursday would guarantee home-court advantage to start the playoffs.

Both Columbus teams face Oxford Tuesday in the Class 6A, Region 2 tournament at Tupelo High School. Tuesday's winners will clinch a playoff berth, while Tuesday's losers still have a chance to advance in third-place games on either Thursday or Friday.

The Lady Falcons earned a top seed in the tournament by virtue of a 21-3 overall record and 6-0 region mark.

"We will have to be ready to play well," Columbus coach Yvonne Hairston said. "The regular season does not matter now. We have to play our best. A (possible region championship game with Tupelo) would be a huge challenge on their home floor."

Both Starkville High School squads take the court in Class 6A, Region 3 play at Madison Central. Each is trying to back 6-0 region records from regular-season play.

The Starkville girls are 18-3 overall. The Lady Jackets have won 14 straight games.

"Proud of how well this team has played this season," Starkville coach Kristie Williams said. "After back-to-back championships, we have a standard established. This group has embraced that standard. They have done their best live up to those expectations."

The lone loss was a final-second setback at Tupelo long before the calendar turned to 2019.

Both West Point teams will be looking to defend the home court against Saltillo Tuesday night in the Class 5A, Region 2 tournament. West Lowndes is hosting the Class 1A, Region 6 event, with both Panthers' squads playing Thursday.

Heritage Academy is in the host role for the MAIS North State Class AAA tournament.

The Heritage Academy boys are one of the top seeds by virtue of a win over Leake Academy in the Class AAA, District 2 championship game Saturday night.

"We have had some injuries this year, so it's a credit to the kids that we have had this type of season," Heritage Academy boys' coach Russ Whiteside said. "It's just been next man up. It's been that way all year for us.

"Everybody is always excited about postseason play."