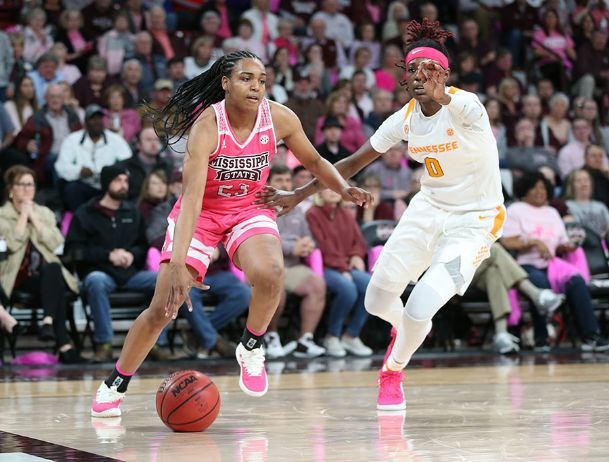 The bull's eye on the back of the Mississippi State women's basketball team's back doubled Monday night.

In addition to earning the fourth No. 1 seed in the first reveal of the top 16 seeds for the NCAA tournament, MSU was assigned to the Albany Regional with -- you guessed it -- Connecticut as the No. 2 seed.

The silver lining is the Bulldogs won't have to return to Bridgeport, Connecticut, the site of a 98-38 loss to the Huskies in the Sweet 16 of the 2016 NCAA tournament.

MSU getting a No. 1 seed is a just reward for a team that is ranked No. 5 in The Associated Press Top 25 and No. 6 in the NCAA's Ratings Percentage Index (RPI).

Throw out Strength of Schedule. That number, which the NCAA tournament selection committee uses to help determine seeding, mattered last for MSU in 2015, when it failed to earn a top 16 seed and was forced to go to Durham, North Carolina, where it lost to Duke in the second round.

Since then, MSU has lived at home in the first two rounds. It has capitalized on the raucous atmosphere at Humphrey Coliseum to go 6-0 the last three seasons. In the last two years, those opening-round victories helped catapult the Bulldogs to the national championship game.

This season, the road to the Final Four in Tampa, Florida, is a little trickier. MSU will have to get there after losing sophomore Chloe Bibby, who suffered a season-ending anterior cruciate ligament injury in the opening minute against South Carolina. The Bulldogs have enough firepower to get back to the Final Four thanks in part to senior Teaira McCowan and graduate student Anriel Howard, who were named Monday to the Naismith Player of the Year Trophy midseason team. MSU is one of five teams in the country with multiple players selected.

Factor in the stellar point guard play of senior Jazzmun Holmes and the astronomical growth of senior Jordan Danberry, who is playing like a first-team All-Southeastern Conference player, and the Bulldogs can beat you in multiple ways.

The road won't be easy, regardless what you think about the state of the SEC. Missouri, Texas A&M, Ole Miss, Vanderbilt, LSU, and South Carolina stand in the way of MSU's second-consecutive undefeated SEC regular season.

Even if MSU (22-1, 10-0 SEC) runs the table, it could face the challenge of having to beat South Carolina for a second time in the Palmetto State to keep its No. 1 seed. In addition to playing the Gamecocks in Columbia, South Carolina, on March 3, the Bulldogs will be one of many that will try to end the Gamecocks' hold on the SEC tournament when that event convenes March 6-10 in Greenville, South Carolina.

There's no telling if Baylor (21-1), Louisville (23-1), and Oregon (23-1), the only team to beat MSU, will remain on the top line, either, or if UConn, reigning champion Notre Dame, Stanford, or North Carolina State, which earned No. 2 seeds in the reveal, will jump to the top line.

Bracketologists like ESPN's Charlie Creme will be busy for the next month as they break down the numbers to hammer out a 64-team field.

For MSU, the challenge is simple: Win. A chance to determine your destiny is all any coach could want. With a 4-1 mark against top-50 teams, MSU has played some of its best basketball against the top teams on its schedule. The latest example came Sunday in a 91-63 victory against Tennessee. A 30-14 fourth quarter helped the Bulldogs hand the Lady Vols their worst loss in the SEC in program history.

After the game, Tennessee coach Holly Warlick was convinced MSU has what it takes to get back to the Final Four.

"I think when you have a strong inside game and you have guards that are super quick and guards that can shoot the three, it's a big challenge," Warlick said. "You can't make a lot of mistakes. I thought the first three quarters we didn't, but when you get a rebound, you've got to hold on to it. They grind it out. They're competitors. I don't see any reason why they can't compete for a championship."

The second and final top-16 reveal will take place Monday, March 4, at halftime of the UConn-South Florida game. The reveal won't have any bearing on the 64-team field, which will be announced at 6 p.m. Monday, March 18 (ESPN).

As much as talk as there will be about the No. 1 and No. 2 seeds, you can rest assured MSU coach Vic Schaefer could care less. It's not like he or anyone on his coaching staff needed something to motivate them. MSU's biggest obstacle will be itself. The Bulldogs can improve in so many areas. That being said, it's hard to deny they have the pieces, especially after watching Danberry spin in the lane and complete a left-handed layup or McCowan go up high with her left hand to snare a pass from Holmes and finish on the block. With contributions from Holmes, Howard, Andra Espinoza-Hunter and the rest of the Bulldogs, Schaefer's squad might be different but it is just as capable.

Remember, Schaefer has said all along that a lack of talent won't be what prevents the 2018-19 team from realizing its potential. The question remains whether the Bulldogs will turn that talent into the arrow that shoots down anyone who dares to mess with their bull's eye.

Adam Minichino covers Mississippi State women's basketball for The Dispatch. You can email him at [email protected] Follow him on Twitter @ctsportseditor.