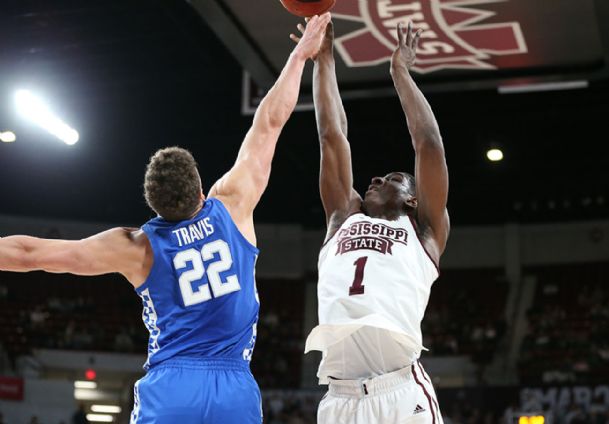 STARKVILLE -- With the NCAA tournament selection process an inexact science, there are rarely must-win games in early February.

However, the Mississippi State basketball team will play a "help the cause game" at 8 tonight when Alabama comes to Humphrey Coliseum.

MSU (16-7, 4-6 Southeastern Conference) has lost the first two games in this three-game homestand.

Against Kentucky, MSU battled back from an 18-point deficit to trail by one with slightly over eight minutes to play. However, the Wildcats scored the next six points to pull away.

"We played two of the best teams in the SEC," MSU freshman Reggie Perry said. "We try to not worry about our losses but still learn from them. We just want to go out, play hard each game and learn from our mistakes."

Unfortunately, the Bulldogs have given themselves a lot of chances to reflect.

Six of the team's seven losses have been by five points or less, with two of those being in overtime. The Bulldogs are 2-3 in conference games at home.

"Bottom line is that the LSU game, we felt that we should have had that one," Howland said. "We had the lead late and couldn't quite get it over the hump. We even had the lead in the overtime. With the Kentucky game, I thought we really got better in the second half. I think we really showed to ourselves if we play with that kind of heart, intensity and all out defense, then we can be good against anybody in the country. Kentucky is the hottest team in the country right now, and they're clawing toward a number one seed (in the NCAA tournament)."

The final eight games of the regular-season schedule appear to be less daunting. However, the Bulldogs will need to find their swagger quickly.

Earlier this season, Alabama recorded an 83-79 victory when this teams met Jan. 29 at Tuscaloosa, Alabama. Four days later, the Bulldogs helped their cause with a road win at Ole Miss.

"(Points inside) will be something that is obviously a big focus for us because they have a consorted effort to get in the paint, attack the basket and score around the goal," Howland said. "They're playing really well right now. They've won their last two games and had a good road win at Vanderbilt which is a hard place to win at. We need to bring our best effort tomorrow."

Starting strong on the offensive end could be a key to victory. Kentucky built a 40-25 halftime lead Saturday.

"They're a good defensive team.," Howland said. "They have great size and length. It starts with our defense though. If we're taking (the ball) out of the net as opposed to taking it off the backboard, it's a big difference because we do a good job when we get out in transition. We can take advantage of numbers and the opportunities. It starts with our defense. You saw on Saturday when we played really good defensively in the second half, it really helped our offense. That's usually the case."

While the team still has four weeks of meaningful basketball ahead, Perry said the recent losses are not holding the team back.

"Any loss is really frustrating, but we try not to dwell on it," Perry said. "We try to learn from our mistakes, carry on to the next game and pick up where we left off."