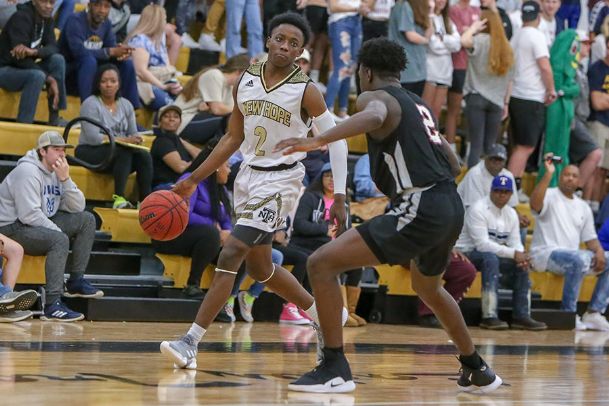 New Hope junior RL Mattix (2) will help lead the Trojans in this weekâs MHSAA Class 4A, Region 4 tournament at Leake Central. Photo by: Chris McDill/Special to The Dispatch

With the second seasons arriving this week, Mattix is seeing all of that talent come to the surface.

New Hope (15-12) will be the No. 2 seed in this week's Mississippi High School Activities Association (MHSAA) Class 4A, Region 4 tournament at Leake Central.

The Trojans have come a long way since the start of the season and that is in large part due to the strong play and leadership of Mattix.

"When January rolled around and we started district play, we started playing better," Mattix said. "The team just gelled. We knew it was coming. It was just a matter of time. We lost six seniors from last season so it wasn't going to happen overnight. We just kept working at it. Right now, we are playing good basketball."

In the final week of the regular season, Mattix scored 18 points in a region win over Louisville and matched that number two nights later in a hard-fought loss to county rival Caledonia.

For his efforts, Mattix is being honored today as The Dispatch's Prep Player of the Week."

"RL is our leader," New Hope coach Drew McBrayer said. "We go as he goes. Not only is he a great player, but he also a leader. He has done a great job of leading the younger guys this year. He has helped them what it takes to compete on this level."

New Hope made a run to the MHSAA Class 4A state tournament last year in Jackson. Mattix is the only returning starter from that squad. He knew the leadership mantle would rest with him.

"It's been fun leading these guys," Mattix said. "The main thing I have tried to stress is hard work. Get in the gym every day and get done what you need to get done. I just love the game. If you lead, you have to love the game. You have to be emotionally invested. Hopefully, the other guys are motivated my work ethic. That's what I am trying to teach them."

The Trojans have given critical minutes to a freshman (Caleb Parr) and pair of eighth-graders (LJ Hackman and Eric Thomas). While the Trojans have some seniors (Tikorian Chandler, Krash Pascisco, Javares Roberts and Presley Langford), Mattix has been the go-to guy from the point guard position, as a leader, scorer and facilitator.

"The leadership role is huge for me," Mattix said. "It's great that the coaches and my teammates have that much confidence in me. It boosts me up and keeps me going when times are tough. If things aren't going well, I have to stay confident, because the other guys are looking at me to lead."

Current East Mississippi Community College standout Terryonte Thomas had a big influence on Mattix, when he was in ninth grade. A senior-laden squad also made an impact a year later.

"From Terryonte, I learned hard work," Mattix said. "You have to put in a lot of long hours in the gym, working on your craft. You will get out of the game what you put into it. Coaches have always said that Terryonte is the hardest worker they have ever been around. I would have to say hard work and being disciplined is what I have learned from the guys before me."

New Hope will face Louisville in a semifinal round game of the region tournament Thursday night. A win means home-court advantage in the first round of the playoffs. Two wins this week would mean a repeat region title and a chance to play additional games at home.

"Winning the (region) tournament is huge for us," Mattix said. "We play much better at home. This team has a chance to make a run, with the way we are playing right now. If we can get some games at home and play in front of our rowdy crowd, it will help our chances a lot to make a good run."