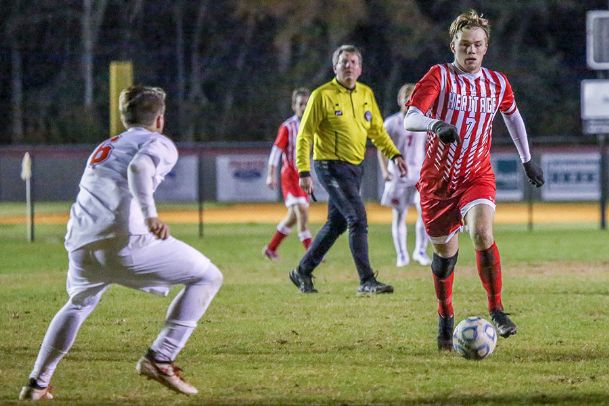 Heritage Academy senior Lex Rogers (7) is shown here in an earlier match against Starkville Academy. Rogers scored twice as the Patriots beat the Volunteers 4-0. Photo by: Chris McDill/Special to The Dispatch

Junior teammate Jonathan Swartz wanted his team to not let up once getting a lead.

Both saw their desires come true.

Heritage Academy scored three first-half goals in the span of nine minutes and held on for a 4-0 win over Starkville Academy in a Mississippi Association of Independent Schools (MAIS) Division III, District 2 matchup at the Starkville Sportsplex.

"We wanted to play fast and aggressive," Sharp said. "The main thing was to get up early. When you play for a championship, you don't want to be fighting from behind. We did a great job of getting the lead early."

With the win, Heritage Academy won the district championship and earned a quarterfinal playoff match at home Monday. Starkville Academy will also quality for postseason play and open play with a quarterfinal match on the road.

The Patriots had a much easier time than a 1-0 win over the Volunteers on Dec. 6.

"We played more comfortably and did what we wanted to do," Heritage Academy senior Lex Rogers said. "I thought we did a great job of controlling tempo. In the first half, we knew the wind be on our side, so we wanted to get some strong shots at the goal, while we were still fresh."

Starkville Academy had the first two legitimate scoring threats in the first half. After those were both denied, momentum quickly turned.

Rogers rammed home a shot from about 15 yards away for a quick 1-0 lead eight minutes into the match.

On the other end, a nice save by Reuben Proffitt preserved the shutout.

"Our back line has been strong all year," Sharp said. "Reuben (Proffitt), Jackson (Dicico), Coen (Velek) and Sterling (Bailey) have been great all year. They hardly let anything get past them."

The Patriots then went back on the offensive attack and had the better of things for the majority of the first half.

Rogers and Sharp scored in the space of five minutes on a pair of corner kicks.

"Getting off to a quick start really helped us win the match," Swartz said. "You want to come out ready. Once we scored a goal, it gave us a lot of momentum in the match. We didn't relax (with the lead), but we did play with more confidence."

The Patriots turned up the pressure on the defensive side in the second half. In a half with few shots, the lone goal came from Swartz in the 58th minute.

"This is a big rivalry," Sharp said. "For us to be come here and win by more three goals really is amazing. Once we had the lead, we pushed back some and wanted to make sure they didn't score."

"We have had one match where we gave up four goal, so that was just a fluke," Rogers said. "Our communication is good, and our defenders are good. It's difficult for the other team to have a series of good shots against us because of how strong we are back there."

Last season, Starkville Academy eliminated Heritage Academy in the semifinal round of the playoffs. That served as extra motivation for the team Monday night.

"(This wins) means a lot to us, because they put us out in the semifinal round of state," Sharp said. "We know we could see them again, so we have to keep playing well and attack like we did in this match."

The Patriots were also happy with the completeness of Monday's victory.

"The first time played them was early in the season," Rogers said. "We are playing much better now. That's what practice time can do for you. We practice hard and you can tell that our chemistry has improved a lot from the start of the season."

Meanwhile, Swartz hopes the team can with three more matches.

"For the seniors, we really want to win a state championship," Swartz said. "We have come close in the past, but like Lex is our best player. He deserves to go out with a championship."