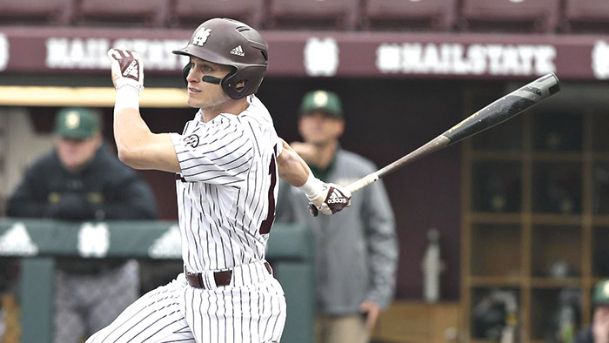 Senior Kendall Wilkinson drove in the first run of the game in The Wâs 5-3 loss to the University of Dallas in the second game of the doubleheader. Photo by: Courtesy photo/Owls Communication

COLUMBUS - The Mississippi University for Women softball team took on the Crusaders of the University of Dallas Wednesday, and The W appeared to be equally matched with its USCAA sister-institution with both games of the doubleheader being decided in the final innings of the competition.

The Owls played well defensively to take Game 1 1-0 in the eighth inning and dropped Game 2 5-3 with their opponent scoring all five runs in the seventh inning.

In Game 1, the Owls outlasted the Crusaders in an extra inning affair to hand Dallas a 1-0 setback.

The Crusaders rapped a pair of hits in the top of the first and added a third hit two innings later, but Dallas couldn't bring them around to score to break the scoreless tie.

After remaining scoreless after seven innings of regulation play, MUW finally dented the scoreboard in the bottom of the eighth to close out the game. Kristen Martin kickstarted rally with a single up the middle, and Anna Lloyd dropped down a bunt to allow Martin to advance two bases. Bailee Watts' single sent Martin home with the winning run.

Martin and Watts led the Owls at the plate, both of whom went 1-for-3. Martin scored once and Watts recorded the game-winning RBI.

On the mound, Madison Scoggin recorded her fifth win of the season. The Bay Springs native pitched all eight innings, gave up just three hits, fanned two and walked one.

Game 2 saw The W score first with a 2-spot in the first inning, as Carolyn "Kendall" Wilkinson singled in the first run of the game and then freshman Anna Kate McDaniel picked up an RBI with a fielder's choice.

In the sixth inning, the Owls added another run, as Wilkinson collected her second RBI of the day on a ground-out which allowed Watts to score.

In the seventh, The W bullpen tired and the Crusaders were able to take the lead and the game as five Crusaders crossed the plate en route to their 5-3 come-from-behind win.

Senior pitcher Ciara Steward was saddled with her first loss of the season after the lefthander from Oxford entered the game in the top of the fourth to pitch 3 1/3 innings and gave up five hits and five earned runs.

At the plate, Watts led her team with a 2-for-3 appearance with two runs scored, while Wilkinson picked up two RBIs.

Next up for the Owls is a Saturday home twinbill versus Hendrix College. The first pitch of the doubleheader is set for 1 p.m.