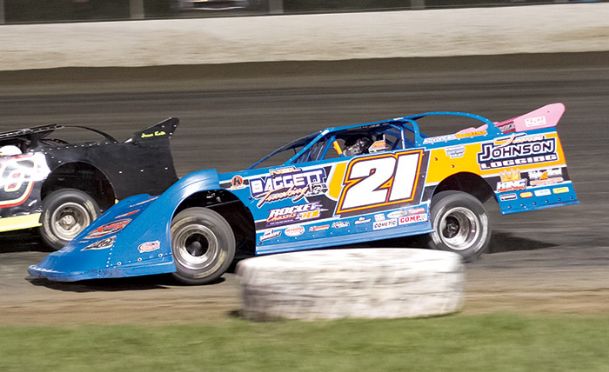 Neil Baggett's mid-season hot streak in 2018 tapered off in the final third of the year, prompting the Super Late Model racer to dig deep for answers.

It was a disappointing finish given the discovery, but it set up Baggett and car-owner Prate Montgomery for a fruitful offseason and start of the 2019 season.

"It was the rack the whole time, and I didn't know it," Baggett said. "You couldn't' see it, but the car didn't feel right after we'd gotten into the wall at Hattiesburg. I couldn't sleep up to that point, but we finally got the car back right."

Baggett already has a feature win under his belt in 2019 -- opening night of the Southern All-Stars' Bash at the Beach in Milton, Florida -- and will make his Mississippi State Championship Challenge Series season debut Saturday night at Magnolia Motor Speedway.

The team and equipment are the same, but Montgomery and Baggett have added a new sponsor: Flora Logging. The "motors are fresh," and they've made some updates to the car, and the team has an extra steering rack -- just in case.

"I told Prate not to give up on me because I think we're little bit better prepared for this season, and that the car was back right," Baggett said. "And sure enough, we go down to Florida and set fast times."

Baggett finished third in the State Series last year, but he doesn't plan to chase points on the series this season. His 2019 schedule will include venues "for fun," and big-money races, like the Lucas Oil Show Me 100 and Comp Cams Topless 100.

"When you start following a series, it becomes a job," Baggett said. "I'm at a point where we do this for fun."

The winner's purse Saturday at Magnolia will be $3,000. All other divisions -- Durrence Layne Late Models, Street Stocks and Sportsman, and Factory stocks -- will hold their first points races of the season.

Baggett will also likely race tonight at Columbus Speedway in the Chris Myers Memorial race, where Super Late Model racers will compete for $2525.25 in "bonus money." Myers passed away in November 2018 at the age of 38. Baggett said he'd just gotten to know Myers before he passed.

"[Myers] actually helped put the body on my car," Baggett said. "He popped a bunch of rivets and drilled a bunch of holes on our car. I'd just hung out with him in the shop. He was a good guy."

Columbus is experimenting with hosting Super Late Models on a weekly basis, a risky proposition given the payouts required to attract enough drivers, and the dwindling pool of participants due to the rising costs to compete. Rod Taylor, promoter at Columbus, announced late in 2018 that the track would have a unique shocks rule and would race American Tires instead of Hoosier, a series of moves intended to lower the cost of competition and attract teams with smaller budgets.

To level the field, Columbus will run a $450 buyout rule for shocks, and tires will run roughly $40 cheaper through American. For drivers that compete at a higher level, this will require an additional investment in cheaper equipment they would only use at Columbus Speedway, Baggett said.

"I applaud Rod and what he's trying to do because I hate to see that track sit," Baggett said. "But, in my opinion, there's better ways to go about it than that. You're trying to limit Super Late Model racing, which is the top of the sport. But he's handicapping some guys.

"Rod's got four or five cars that would bring five or six people per car that are not coming because of that rules package, which is unlike any other track in the country. But I applaud him for trying to help Late Model racing."