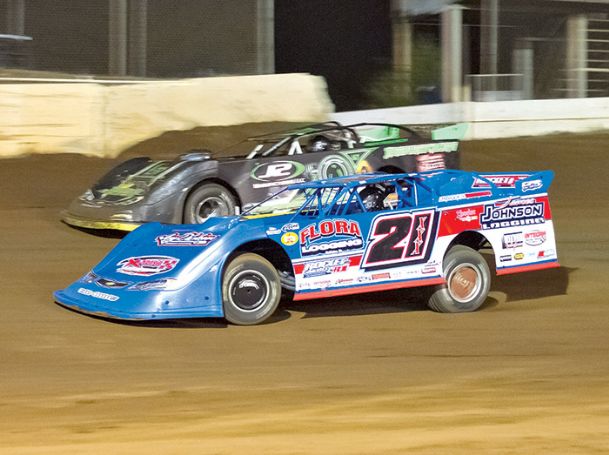 Neil Baggett hadn't been challenged for his lead in the Super Late Model feature Friday at Columbus until the final two laps, seemingly assured a win against a sparse field of cars.

But on the last lap, Baggett saw a nose for the first time in the race, and he didn't know who was driving the car -- the Black Diamond No. 1 car. It was Garrett Alberson, a Las Cruces, New Mexico, native who started 11th and at the end of the field.

Baggett would stymie Alberson's run heading into turn 1 on the final lap, checking high on the front stretch and holding off Alberson in turns 3 and 4.

Baggett said his crew were signaling for him to race the bottom, though it was difficult for him to stick the car there. He said his last-second decision to take the top was a "gut feeling."

"That last three or four laps we run before that last (lap) caution, I was having to park it down here in the bottom to stay from sliding up and catch that strip off," Baggett said. "But it just felt wrong ... I felt like we needed to be up around that top, slinging it. "But [his crew] were under the caution saying go to the bottom. Sometimes you just got to go with your gut feeling in the car.

"That last lap, when we got down here, I just happened to glance up and see a nose, and I knew somebody was hammerin'. I drove a little harder the last lap, and it worked out."

Baggett's win in the Chris Myers Memorial Race marks his second of the season. He won in Milton, Florida, on March 15.

Prior to Friday, Alberson had run six races this season since taking off all of 2018 to serve as crew chief for Earl Pearson, Jr. on the Lucas Oil series. His second-place finish at Columbus is his top feature finish of the season. Alberson had only run at Columbus once before (2014), and he'd planned to race Saturday at Magnolia Motor Speedway in a State Series race before rain canceled the event.

Alberson said he and Baggett would have been "side by side" at the finish line if Baggett hadn't checked up on the last lap, but he called the move "good defensive driving."

"I was getting a good run and think I finally had the run that I needed, and they pointed [Baggett] back up to the top -- or somebody did -- going into (turn) 1 on the last lap, and that kind of killed the one shot we had," Alberson said.

Alberson said the Lucas Oil schedule will likely keep him busy as he continues as Pearson Jr.'s crew chief, but he hops his runner-up finish at The Bullring can "amp up" his part-time team to race on off-weekends.

He'll hope for easier circumstances his next time out after barely making the field Friday. Alberson and his team had to fix a pair of tires that blew out on their trailer, and then they locked their keys in their truck.

"[Columbus] was about the best dirt surface you could ask for, the most fun you could have on a dirt track," Alberson said. "It was awesome."

"And thanks to (car owner) Ronnie Stuckey -- he lent us tons of parts and tools and stuff just so we could make it here."

In other race action