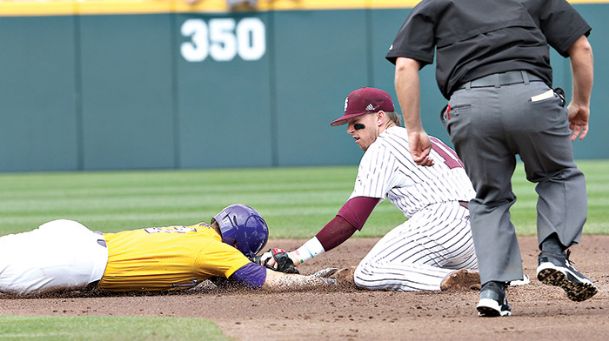 Mississippi Stateâs Jordan Westburg (11) picks off LSUâs Chris Reid (4) at 2nd base during the 4th inning of their game Saturday in Starkville. Photo by: Jim Lytle/Special to The Dispatch

Scattered among the 11,648 onlookers at Dudy Noble Field on Saturday afternoon were pockets of purple and gold.

Midway through the top half of the seventh inning, fans donning the harrowed colors of the Bayou Bengals joined together in a chant.

"Go," yelled those on the third base side. "Tigers" responded their first baseline counterparts.

It was that kind of day in Starkville as the Mississippi State baseball team fell for the second consecutive day to LSU, this time 11-2 in game three of their weekend set.

And while there were marginal positives to glean from the rubber match, it was familiar issues that doomed the Bulldogs.

Fielding and communication, or a lack thereof, continued to be a problem Saturday.

MSU finished with seven errors on the weekend.

Sophomore infielders Jordan Westburg and Justin Foscue continued to struggle in the field -- combining for three of those seven errors. The duo has now totaled 16 of the team's 33 errors this year.

Off an Antoine Duplantis swing in the top of the third inning, sophomore first baseman Tanner Allen and junior catcher Dustin Skelton gave chase into foul territory. Nearing the LSU dugout, the two collided. Though Allen was able to hang on, it was the third such instance of contact between two fielders this weekend.

"We just got to get back to practice this week and get back to the fundamental baseball," MSU coach Chris Lemonis said. "You know, in our league you're not going to win them all, you've got to be able to bounce back and play good baseball."

Saturday's game also demonstrated the Bulldogs' desperate need for a No. 3 starter.

Senior Peyton Plumlee was solid in two innings of work, giving up one run on two hits along with four strikeouts.

But with six left-handed batters in the LSU lineup Saturday, Lemonis turned to junior southpaw Jack Eagan in the third inning for matchup purposes.

In 1.1 innings pitched Eagan was tagged for two runs, one hit and two walks. He struck out two.

"We figured if we can get one time through with Peyton, go to one lefty, then go to the other and then get it to the back end of our staff, but it didn't work out that way," Lemonis said.

MSU's next game is Wednesday at home against Louisiana-Monroe. First pitch is scheduled for 6:30 p.m.

DAWG NOTES: Mangum moved up the SEC and MSU all-time hits list with a 2-for-5 afternoon. He now sits tied for second in program history and tied for seventh in SEC history with 328 career hits.

Rowdey Jordan notched his first home run of the season with a two-run shot down the left field line in the ninth inning.

This was the fourth straight game MSU gave up one or more runs in the first inning.